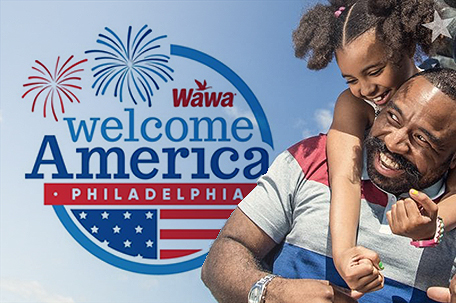 Normally, the streets of Philadelphia would be abuzz with the sounds of Philadelphians and tourists taking part in Wawa Welcome America, the city’s annual celebration of Independence Day.

But while the coronavirus pandemic has kept the traditional Welcome America celebration from taking place, it hasn’t stopped the celebration altogether. Thousands of people locally and around the world have been taking part in the celebration, which included performances from the United States Army Field Band, the Philadelphia Orchestra, The United States Army Band, Zak Williams and 1/Akord and other musical guests.

On Wednesday, Wawa held its 28th annual Hoagie Day, which usually involves hundreds of people making a large hoagie on Independence Mall that is then served to the gathered guests.

This year, all 900 Wawa stores made 45,000 hoagies and donated them to a group of non-profit organizations including Philabundance, the USO and organizations that benefit first responders, healthcare workers and food banks in the six states Wawa calls home. As part of Hoagie Day, Wawa also gave a virtual tour of the USO for those who participated in the virtual Hoagie Day.

Independence Blue Cross has been holding its Wellness Corner, allowing Welcome America’s virtual participants to have a moment to relax, relate and release during these trying times. The U.S. Army Esports tournament is also going on as part of the festivities.

Wawa Welcome America concludes on Saturday, July 4 with concerts of all kinds. The shows start with the Pennsylvania Lottery Groove Stage at 3pm, and the Chill Moody Stage featuring local artists at 5pm. The Celebration of Freedom Ceremony will feature the winners of Mayor Jim Kenney’s Magis Award, the Wawa Foundation Hero Award, and the Celebrate Freedom Award, presented by Freedom Mortgage.

The celebration ends with the Wawa Welcome America Fourth of July concert, which will be at the Met Philadelphia, rather than the Philadelphia Art Museum steps this year. This year’s show features award-winning singer and actress Cynthia Erivo and singer/songwriter/dancer Jason Derulo. That starts at 8pm and can be seen on NBC-10. There will be no fireworks this year.

To check out Wawa Welcome America, go to the organization’s website welcomeamerica.com.