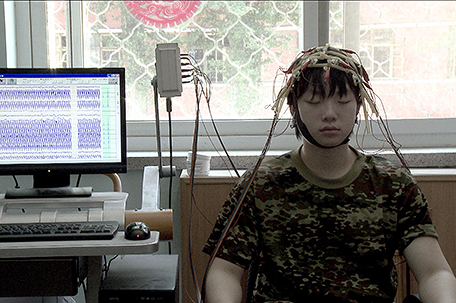 How long do you think you could you survive without access to a cell phone or computer? A few hours? A day? A week? How about three months? That’s the degree of deprivation awaiting adolescents diagnosed as addicted to the internet over in China, the first country to officially recognize the burgeoning malady as a clinical disorder.

The Rx for the afflicted is 90 days of rehab at one of 400 paramilitary boot camps where one must adhere to a Spartan daily regimen sans any electronic stimuli. Going cold turkey is not an easy thing to adjust to for kids used to playing video games for hours on end.

But that is precisely the goal of the shrinks in Web Junkie, a cautionary tale making one wonder whether America might not be far behind. The documentary was this critic’s pick as the #1 foreign film of 2014. It was directed by Shosh Shlam and Hilla Medalia who were afforded extraordinary access to the intervention and treatment of a trio of teenage boys whose exasperated parents sought help from a facility in Beijing.

The film traces the transformation of Hope, Hacker and Nicky from insufferable, anti-social jerks who barely communicate with their families, teachers and classmates into sensitive souls truly changed by therapy and the period offline. It’s nothing short of miraculous to see the same kid who couldn’t be bothered to talk to his father eventually melt into a touchy-feely hugger who upon reuniting tearfully says, “I love you, Dad.”

Overall, the movie makes a convincing case that cell phone use ought to be limited during a child’s formative years when the social part of the brain is still developing. For, the subjects of this telling expose certainly seem to suffer from stunted development due to too much time spent playing computer games and surfing the ‘net.

A tough love remedy from the Orient designed for impressionable young minds which prefer virtual reality to relating in the flesh.

In Mandarin with subtitles