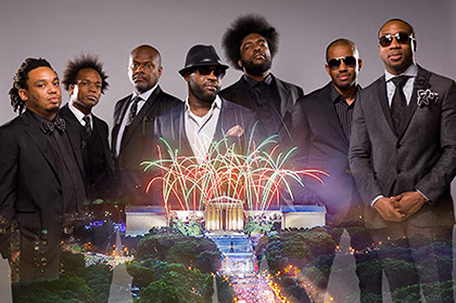 ABOVE PHOTO: The Roots

This summer, Philadelphia will once again prove that the City of Brotherly Love is the only place to be on the Fourth of July. Today, Mayor Michael A. Nutter announced that the Wawa Welcome America! festival’s Philly 4th of July Jam will feature a number of top musical artists, including: The Roots, Ed Sheeran, Nicki Minaj, Jennifer Hudson, Aloe Blacc, Ariana Grande and Vicci Martinez. “The City of Philadelphia is proud to welcome such a diverse and talented group of musicians to our city this Fourth of July,” said Mayor Nutter. “With this impressive lineup, the 2014 Philly 4th of July Jam is sure to be the best yet. We have always known that Philadelphia is the foremost place to celebrate our nation’s birthday, but the Wawa Welcome America! festival, and particularly the events on the Fourth, is our opportunity to prove it to the world.” Philadelphia’s own The Roots return as the house band for the Philly 4th of July Jam. This year’s guest artists will join The Roots on the Benjamin Franklin Parkway for a series of nonstop, electrifying performances. Ed Sheeran entered the UK album charts at #1 with the highest opening sales figures for a debut male solo artist ever and is now certified 6x platinum. Here in the U.S., “The A-Team” helped propel Sheeran to a record-breaking chart debut and three Grammy nominations.

A successful rapper, songwriter and now actress, Nicki Minaj rose quickly to prominence in the entertainment industry while maintaining her own distinctive brand. Minaj’s debut studio album, “Pink Friday” (2010), peaked at #1 on the US Billboard200 and was certified platinum by the Recording Industry Association of America (RIAA). Its most successful single, “Super Bass,” was certified 8x platinum, making  it one of the best-selling singles in the United States. During this time, Minaj became the first female solo artist to have seven singles simultaneously charting on the Billboard Hot 100. Her second studio album, “Pink Friday: Roman Reloaded” (2012), topped the Billboard200 and became one of the best-selling albums of that year. She also served as a judge on the 12th season of “American Idol.” Minaj’s most recent venture has been into the acting world, co-starring in The Other Woman – in theaters now.

Already a Grammy and Oscar winner, Jennifer Hudson’s star is still on the rise. Hudson first became a household name in 2004 as a finalist on the third season of American Idol, and cemented her place in the industry when she made her film debut in Dreamgirls in 2006. Her role in Dreamgirls earned her a number of awards, including an Academy Award for Best Supporting Actress, a Golden Globe Award, a BAFTA Award, an NAACP Image Award and a Screen Actors Guild Award. The Chicago-born songstress has also garnered great praise for her music, receiving a Grammy Award for her debut album, Jennifer Hudson, which was released in 2008 and certified gold by the RIAA. Her second album, “I Remember Me,” was also certified gold and reached #2 on the Billboard 200. Hudson’s latest single, “Walk It Out,” is available now on iTunes and Amazon.

Aloe Blacc is an American singer, songwriter, rapper and musician with a knack for mixing poetic lyrics, huge hooks and feel-good grooves. His mega-hit “Wake Me Up” dominated the airwaves and the charts in 2013, climbing to #1 in 102 countries. In early 2014, his latest single “The Man” climbed to the Top 10 on Billboard’s Digital Songs chart. His third solo album, Lift Your Spirit, showcases Blacc’s unique style which blends folk and soul, and finds him teaming up with premier producers like Pharrell Williams and Rock Mafia.

After playing Cat Valentine on the Nickelodeon sitcom “Victorious” and the spinoff “Sam & Cat,” Ariana Grande made her mainstream debut when her first single became a Top 10 hit on the BillboardHot 100 and was certified double platinum by the RIAA. Her first studio album, “Yours Truly,” received critical acclaim and debuted at #1 on the Billboard 200. Following the release of her album, Billboard also ranked Grande number four on its list of “Music’s Hottest Minors in 2013.” Grande recently premiered “Problem,” the lead single from her second album which features Australian rapper Iggy Azalea, at the 2014 Radio Disney Music Awards. “Problem” broke a major record upon its release, reaching #1 on the iTunes chart in just 37 minutes – the fastest climb ever.

Vicci Martinez, a finalist on the first season of “The Voice,” has made a career of going against the grain both musically and lyrically. With a penchant for writing honest, heartfelt songs, Martinez expressed her genuine spirit on every song from her debut album, “Vicci.” Martinez’s musical style is a combination of various genres, ranging from soulful folk and classic rock to R&B. Prior to her appearance on “The Voice,” the singer-songwriter released several independent albums and toured the country for nearly a decade. Her latest single, “Otra Cancion,” is currently available on iTunes and Amazon.

The 2014 Wawa Welcome America! calendar provides visitors with seven days of enticing events leading up to the Fourth of July holiday, starting with the new kick-off event on Saturday, June 28 – Liberty Block Party at the Shops at Liberty Place. Liberty Block Party will offer Philadelphia residents and visitors an opportunity to explore some of the city’s diverse food trucks and restaurants while enjoying a variety of exciting live performances.

Another new addition to the schedule is the Mural Arts Paint Day, which underscores Philadelphia’s reputation as the City of Murals. On Sunday, June 29 the Wawa Welcome America! festival will team up with The Mural Arts Project for a neighborhood paint day in Mantua – recently designated by President Barack Obama as one of five Promise Zones in the nation.

On Monday, June 30, the festival will host its first Go 4th & Learn event of the year at the Academy of Natural Sciences. Thanks to Wawa, the Academy will be open free to the public all day. Later that evening, the Philly @ the Movies series will kick-off in Franklin Square Park with a screening of Disney’s Frozen, the highest-grossing animated film of all time.

The fun continues on Tuesday, July 1 when Go 4th & Learn takes over Smith Memorial Playground and Playhouse in Fairmount Park. Festival attendees with have two evening entertainment options that night – the Philadelphia Orchestra Neighborhood Concert at Penn’s Landing or an outdoor screening of The Hunger Games: Catching Fire (part of the Philly @ the Movies series) in Rittenhouse Square.

Wednesday, July 2 is packed with festival activities. First, families can Go 4th & Learn about history at the National Constitution Center, which will be open free to the public all day thanks to Wawa. Then, attendees can head over to the lawn of the Independence Visitor Center for Wawa Hoagie Day, featuring 4.5 tons of Wawa’s famous hoagies. Philadelphia International Airport will unveil a new photo exhibit focused on Civil Rights that morning as well. To close out the day, the final Philly @ the Movies film, Rocky, will be shown on the steps of the Philadelphia Museum of Art.

On Thursday, July 3, Peter Nero will return as Conductor Emeritus for the renowned POPS! On Independence concert. Nero will lead the Philly POPS in a series of patriotic numbers in front of Independence Hall that evening.

Wawa Welcome America! pulls out all the stops on Friday, July 4 with a non-stop day of exciting events. The day starts with the Celebration of Freedom Ceremony, which takes place in front of Independence Hall and will honor the 50th anniversary of the Civil Rights Act of 1964 and the 60th anniversary of the landmark Brown v. Board Supreme Court decision. After the Ceremony, the Independence Day Parade will make its way through historic Philadelphia. More than 5,000 participants from across the nation, including Miss America, marching bands, floats, military organizations and several special performance teams will take part in the parade. The party continues over on the Benjamin Franklin Parkway, where Party on the Parkway will feature countless food vendors, interactive activities, and two performance stages – the Questlove Stage and the Multicultural Stage. The evening concludes with the Philly 4th of July Jam and Fireworks Grand Finale.

“Wawa Welcome America! is determined to provide our guests with the best possible experience during this year’s festival,” said Desiree Peterkin-Bell, City Representative and Executive Director of Welcome America, Inc. “This festival is constantly trying to outdo itself, making our celebration of America’s birthday in America’s birthplace bigger and better each year. We have some terrific events leading up to the Fourth of July, and the talent secured for the Philly 4th of July Jam will serve as the perfect ending to our celebrations.”

The Wawa Welcome America! Philly 4th of July Jam takes place each year on the Benjamin Franklin Parkway and is followed by a fireworks display over the Philadelphia Museum of Art.

Additional details about Wawa Welcome America!’s musical performances, including local acts that will be a part of the festivities, will be made available online.

Other organizations and attractions will host free events throughout the city during the festival week and even extending past the Fourth of July. Visitors will be able to check the Wawa Welcome America! website for a list of these partner events.

Wawa Welcome America! is a multi-day festival that celebrates America’s birthday in America’s birthplace, Philadelphia. Wawa joined the festival as the title sponsor in 2010. For more information, please visit www.welcomeamerica.com, like us on Facebook (www.facebook.com/WawaWelcomeAmerica) and follow us on Twitter and Instagram (@July4thPhilly).