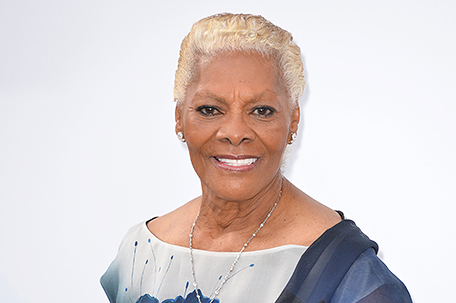 The first standing ovation Dionne Warwick ever received was as a 6-year-old, when her reverend grandfather brought her up to the pulpit of the St. Luke’s AME Church in Newark, New Jersey, where she sang “Jesus Loves Me” for a rapt congregation.

Warwick’s most recent standing ovation, though, was on Saturday, at the Toronto International Film Festival after the premiere of the documentary “Dionne Warwick: Don’t Make Me Over.” Though the festival has been a more muted affair this year because of the pandemic, the 80-year-old Warwick has made the most of it. Over the weekend, she took over the festival’s official Twitter account and posed with “my Sherlock Holmes,” Benedict Cumberbatch.

s the pop-soul legend of songs like “I Say a Little Prayer,” “I’ll Never Fall in Love Again” and “Walk on By,” Warwick has always cut a distantly un-diva path. And, in an interview, Warwick wondered just why she shouldn’t exude contentedness.

“I had an incredible childhood,” says Warwick speaking by Zoom. “I love God and God loves me, apparently. He’s kept me happy and healthy and given me the ability to make other people smile with the gift he gave me, my voice. So what’s the reason not to be happy?”

“Dionne Warwick: Don’t Make Me Over,” which is up for sale at the festival, is directed by her longtime business partner Dave Wooley (who co-authored Warwick’s 2010 autobiography) and David Heilbroner (“The Newburgh Sting”). It’s an affectionate tribute to the Grammy-winning vocalist that may be light on personal details. (There’s little on her two marriages, twice divorced, to Bill Elliott, or her relationship with Sammy Davis Jr.) But the documentary delves more fully into Warwick’s music, from her collaborations with Hal David and Burt Bacharach to her star-studded recording of “That’s What Friends Are For” to benefit AIDS research.

Elton John calls her one of the greatest female singers of all time. Quincy Jones, Alicia Keys and Gladys Knight all pay their respects, as does Snoop Dogg, who recalls when Warwick, a critic of gangsta rap, summoned him, Tupac and Suge Knight to her home at 7 a.m. one morning to talk about violence and misogyny in lyrics. “We got out-gangsta’ed that day,” says Snoop.

Perhaps most importantly, the documentary makes the case for Warwick as a pioneering crossover artist. In it, she discusses performing for segregated audiences in Jim Crow South while touring with Sam Cooke in the ’60s. In 1969, for “Do You Know the way to San Jose?” Warwick became the first Black solo female artist to win a pop award at the Grammys.