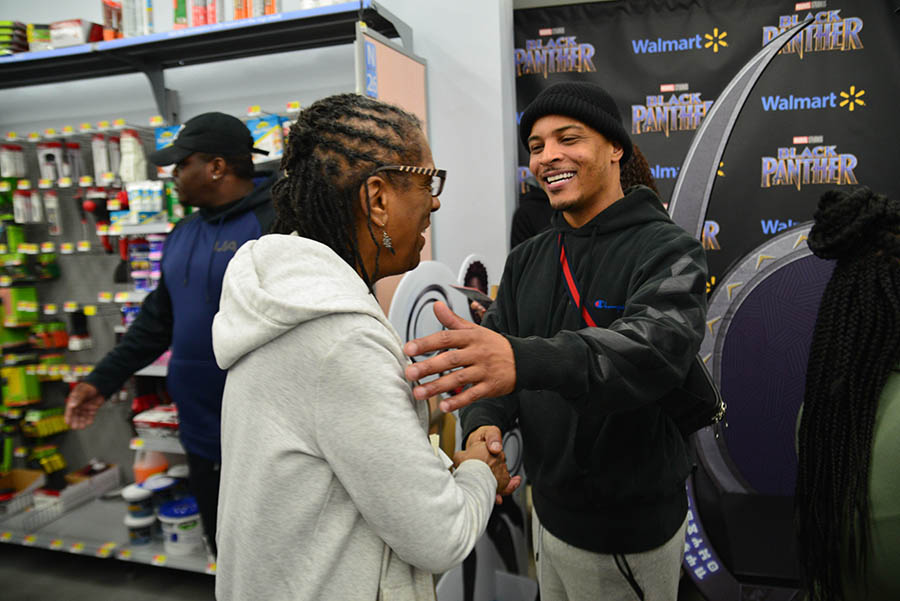 As you approached the Walmart off Cascade Road in SouthWest Atlanta on February 12th, you could feel immediately that something special was happening. Several news trucks were parked in the front of the store and inside a line nearly 500 people stood waiting for a special guest. Some of them arrived early with fold up chairs and at 5:30pm he arrived. It wasn’t T’Challa King of Wakanda, but Tip “T.I.” Harris, King Of The South!

The Grammy Award winning artist, producer, rapper and actor is no stranger Walmart. He’s known for making surprise visits to Walmart on Christmas Eve where he’s purchased Christmas gifts for the children of single mothers standing online in the store.

T.I.’s activism and commitment to the community made him the ideal celebrity for Walmart to partner with for their Marvel Black Panther free ticket-giveaway and advance screening. Nearly 250 lucky ticket holders will join Walmart, T.I. and specially invited VIP guests for a preview of Marvel’s Black Panther on February 13th, three days ahead of its national release.

Filmed in Atlanta, Black Panther generated more than $83.9 million to the local economy and contributed more than $26.5 million in wages to more than 3,100 workers across the state.