Walk of Fame to welcome Philadelphia Orchestra, The O’Jays 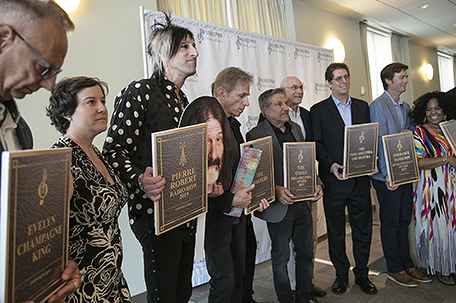 ABOVE PHOTO: The latest class of honorees for The Philadelphia Music Alliance Walk of Fame pose for a photo at the conclusion of a news conference, Wednesday, Aug. 7, 2019, in Philadelphia. (Heather Khalifa/The Philadelphia Inquirer via AP)

Philadelphia’s Music Alliance will induct musicians spanning a wide range of genres to its Walk of Fame, including The Philadelphia Orchestra, R&B group, The O’Jays and ’80s rock band The Hooters.

The class of  2019’s other honorees include Philadelphia socialite and philanthropist Dorrance “Dodo” Hamilton, who died in 2017; disco queen Evelyn “Champagne” King and Jody Gerson, the current CEO of Universal Music Publishing Group and the first woman to run a major music-publishing company.

The announcements were made Wednesday Aug. 7 at the Independence Visitor Center.

The group will be formally inducted on Oct. 22 during a gala at The Bellevue.

Labelle, Jill Scott and other notables inducted into Philadelphia Music Walk of Fame