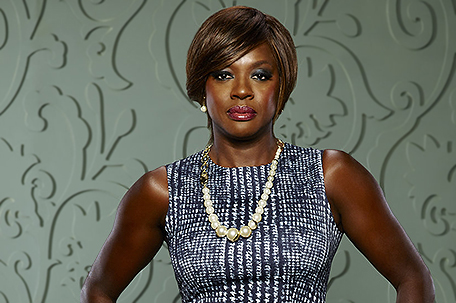 The brilliant, charismatic and seductive Professor Annalise Keating (played by the equally brilliant Viola Davis) gets entangled with four law students from her class “How to Get Away With Murder.” Little do they know that they will have to apply what they learned to real life, in this masterful, sexy, suspense-driven legal thriller.

In one of the highest-profile new series this season, Davis is set as the lead of the ABC drama “How to Get Away With Murder,” from ABC Studios and Shondaland. “How to Get Away With Murder” is a sexy, suspense-driven legal thriller that centers on ambitious law students and their brilliant and mysterious criminal defense professor (Davis) who become entangled in a murder plot that could rock their entire university and change the course of their lives.

In 2012, Davis received an Oscar nomination for “Best Actress” for her portrayal of the heart-broken but stoic ‘Aibileen Clark’ in The Help. Emma Stone, Bryce Dallas Howard and Octavia Spencer also star. The film adaptation of Kathryn Stockett’s best-selling novel, directed by Tate Taylor, was set in Jackson, Mississippi during the turbulent 1960s and was also nominated for an Academy Award for “Best Picture.” Davis won the Screen Actors Guild and Critics’ Choice “Best Actress” Awards for her portrayal of ‘Aibileen,’ and was also nominated for a Golden Globe and British Academy Film Award. The film won a Screen Actors Guild Award for “Outstanding Performance by a Cast in a Motion Picture” and a Critics’ Choice Award for “Best Acting Ensemble.”

FiveThings to Know About Annalise Keating

With the much-anticipated series premiere of How to Get Away with Murder only days away, now is the perfect time for a crash course in Annalise Keating 101. This is a dynamic character that is about to take Thursdays by storm. Keep reading to learn more about Annalise before the big premiere!

1. Annalise Keating is a Criminal Law professor at a Philadelphia university. And she’s everything you hope your professor will be: brilliant, passionate, creative and charismatic. She’s also everything you don’t expect: sexy, glamorous, unpredictable and dangerous.

2. In addition to her work as a professor, Annalise is also a defense attorney who represents the most hardened criminals. We’re talking people who have committed everything from fraud to arson… to murder.

3. Each year, Annalise selects a group of her smartest and most promising students to come work at her law firm. (This year’s students better get ready, because they will soon have to apply what they learn in class to real life!)

4. In addition to her top students, Annalise also has two dedicated associates who work for her: Frank Delfino and Bonnie Winterbottom. Working for Annalise is the opportunity of a lifetime – but it does come with sacrifices.

5. All in all, Annalise Keating seems like she has it all, right? She has an extremely successful career and a loving husband, Sam. But another relationship will soon force her to confront secrets about her life that she never saw coming…

Don’t miss the series premiere of How to Get Away with Murder Thursday, Sept. 25 10|9c – right after the season premieres of Grey’s Anatomy and Scandal.

How Viola Davis escaped another maid role in ‘Beautiful Creatures’