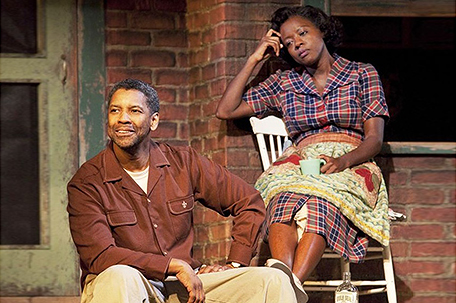 ABOVE PHOTO:  Denzel Washington and Viola Davis starred in a Broadway revival of FENCES, directed by Kenny Leon, both giving strong performances that would earn them the highest honor in the theatre world, the Tony Award.

Viola Davis, who won a Tony award for her performance in the 2010 Broadway production of “Fences,” has revealed that she will appear in a screen adaptation of the August Wilson play.

“They are making ‘Fences,’ August Wilson’s play, into a feature that Denzel Washington is directing and I’m going to be in,” Davis told The New York Times in a recent profile.

Davis co-starred with Denzel Washington in the 2010 Broadway production, which was directed by Kenny Leon (both Davis and Washington won Tony Awards for their performances).

The age-old story of the long-stalled film adaptation of August Wilson’s award-winning play is that, the playwright insisted to Paramount Pictures, the studio that had the rights at the time, that the director of the film be black.

Of course Paramount didn’t feel that was necessary, saying that they wanted “the best director for the job.” Even Eddie Murphy, who was then attached to star in, and co-produce the film adaptation, told Wilson that he wasn’t going to hire a director just because he/she was black.

But this wasn’t a clause in the original agreement between Wilson and Paramount, so the studio wasn’t legally bound to adhere to Wilson’s wishes, but they also realized that they didn’t want to do a film adaptation of “Fences” without Wilson’s blessing. While seeming to take Wilson’s wishes under strong consideration, the studio approached Barry Levinson, who obviously isn’t Black, to helm the film.

Needless to say, Wilson didn’t approve. Levinson eventually backed away from the project after seeing the play and saying that he didn’t think that the version of the script that Wilson had written would translate well to the screen.

So the project stalled.

Wilson continued to publicly express his frustration about the number of films that tell stories about Black people that were/are directed by Whites, arguing that “Whites have set themselves up as custodians of our experience.”

There’s a really good piece on this in the New York Times (it was actually written in January 1991, not-so-long after all the above transpired). It details the journey the adaptation took, and all the different players who were involved at different times.

In fact, Dark Girls director Bill Duke was a front-runner for the directing job. Warrington Hudlin was also approached, not to direct, but to come up with a short list of Black directors who were qualified for the job. Hudlin provided a list of 12 names, which included directors like Gordon Parks, Charles Burnett and Spike Lee. Certainly they all would’ve been qualified.

But, apparently, Paramount wasn’t interested in any of them at the time.

There were a lot of opinions sought on this, including director Norman Jewison’s, who recalled his own experience in attempting to direct an adaptation of “The Confessions of Nat Turner” in the late 1960s. The attempt was met with much opposition from the Black community, in part because he was white, but mostly because many felt that the book distorted Turner’s story. Of course, Jewison would face a similar opposition when he sought to direct the biography of Malcolm X’s.

The New York Times article paints a picture of a charged debate between all those involved (James Earl Jones, who starred in the 1987 premiere of “Fences” on Broadway, was one of those voices), with Wilson standing firm, and never wavering.

Ultimately, the studio film adaptation never got made, although the play continued to thrive on the stage, throughout the country.

Skip ahead to 2010 when Denzel Washington and Viola Davis starred in a Broadway revival of the play, directed by Kenny Leon, both giving strong performances that would earn them the highest honor in the theatre world, the Tony Award.

But what may not be universally known is that, when producer Scott Rudin first approached Denzel Washington about “Fences,” he sent him August Wilson’s screenplay adaptation of the play, suggesting that Washington star and direct the film version of it. Washington, a lover of the stage, first and foremost, felt that he needed to do the play first before attempting to direct a film adaptation of it. Rudin was okay with that, Kenny Leon was hired to direct, Viola Davis came onboard to co-star, and the rest is history.

So now that he’s gotten the stage version out of his system, it looks like Washington is now ready to return to “Fences” as Rudin apparently originally wanted – to direct a filmed version of it (and maybe co-star with Davis again). After all, in the end, he’ll be meeting the late August Wilson’s criteria that a Black director helm the film.

As for when this might happen, obviously several different elements have to line up – most notably financing.

Will a studio finally back an adaptation of “Fences” with a black director? Well, it’s Denzel, and he is a ‘name’ with a lengthy track record, so I’d say the chances this time are probably higher than they were with any of the Black directors who were being considered 25 years ago.

The times have also changed a bit… or have they?