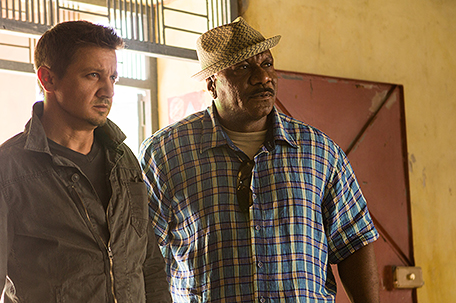 Ving Rhames was born and raised in Harlem, New York. His career as a thespian began at the New York High School of Performing Arts, followed by training at the prestigious Julliard School of Drama. Soon thereafter, the talented actor landed his first role on Broadway in “The Winter Boys.” In 1985, he made his first TV appearance in Go Tell It On the Mountain.

Rhames subsequently segued to feature films, and was eventually cast as a merciless drug dealer opposite Samuel L. Jackson and John Travolta in Quentin Tarantino’s Pulp Fiction. That performance helped him land the role of Luther Stickell in Mission: Impossible opposite Tom Cruise.

Rhames has since starred in many other blockbusters, such as Rosewood and Con Air. In 1998, he won a Golden Globe for his powerful portrayal of Don King in Don King: Only in America.

From there, he went on to star in Out of Sight with George Clooney and Jennifer Lopez, Entrapment with Sean Connery and Catherine Zeta-Jones, and Bringing Out The Dead with Nicolas Cage, Patricia Arquette and Tom Sizemore.

Other films on his impressive resume include Baby Boy, Undisputed, Dark Blue and Dawn Of The Dead. And he ventured behind the camera in 2005 as a producer for the USA series “Kojak.” His producer credits also include:  “Back In The Day,” “Animal” and “Shooting Gallery.”

Kam Williams: Hi Ving, thanks for the interview. I’m honored to have another opportunity to speak with you.

Ving Rhames: When did we last speak, Kam?

KW: It was for the release of Mission: Impossible III.

KW: I will be mixing in my own questions with some sent in by fans. Kevin Williams says: You’ve been one of my favorite actors, ever since seeing Pulp Fiction. I’m glad to see you back in this latest installment of Mission: Impossible. Since you play weapons expert Luther Stickell on the IMF team, do you try to keep up with what is going on with military hardware in the real world?

VR: Quite honestly, I play a computer expert, not a weapons expert. Luther’s a computer geek, so I don’t know where Kevin got that misperception from. But I don’t really keep up with developments in quote “hand-to-hand” combat type weapons or other military technology, except drones. However, I do gang intervention in California, and there are a lot of those military weapons in the ‘hood with the Crips and the Bloods. I hate to say it, but you can find almost anything there in terms of military weaponry, even grenade launchers.

KW: How did you enjoy reuniting with Tom Cruise to make Rogue Nation?

VR: Kam, we did the first one 18 years ago, so I feel very blessed and very privileged. And outside of Tom Cruise, I’m the only person who’s been in all five films. And I think that I might have made history for an African-American. I don’t know whether any black actor has been in an original and four sequels. You know what I’m saying? So, I really have to thank Tom, and I’m glad to be a part of this process.

KW: Marilyn Marshall says: Why do you think the Mission: Impossible franchise has been so successful?

VR: I really think it’s because of Tom Cruise’s passion and energy, and the fact that he deals with every facet of production. He’s involved with the writers… he has a certain vision… and I think he knows what his audience wants, which I think is a by-product of his being in the business for over thirty years, since he started young as an actor. He really has a grasp of what both American and foreign audiences want to see. So, I give 95 percent of the credit to Tom Cruise.

KW:Editor/legist Patricia Turnier asks:What was your favorite scene to shoot in Rogue Nation?

VR: The scene where the four of us, Simon Pegg, Jeremy Renner, myself and Tom, are sitting in a bar. It almost looks like just four guys hanging out. But it was really four friends. The simplicity of that scene, which is surrounded by so much action, makes it special to me, especially given the good chemistry among the four of us.

KW: Professor/filmmaker/author Hisani Dubose says: An African-American actor once told me that it is extremely difficult for black males with deep voices and a strong presence to get work. So, how did you manage to succeed in spite of that?

VR: First of all, I don’t agree with that assumption. But here’s how I feel about it. I attended the High School of Performing Arts, and I graduated from the Juilliard School. So, I believe in being trained, just like you have to do with any profession. As a professor, she had to get a master’s degree. I find that a lot of aspiring actors never really train, and yet think they can just act. Being a black man with a deep voice is actually more of a plus. I do voiceovers for Arbys, ADT, and other companies. So, I make a lot of money by basically using not only my voice, but also my size, as far as the camera is concerned. But train, go to school and train. Become a craftsman.

KW: Harriet Pakula-Teweles says: Giving your Golden Globe award in 1998 to Jack Lemmon was an amazing demonstration of generosity and respect for another actor.

VR: Thank you, Harriet. That was some years ago, but I always tell people: God laid it on my heart. Besides, awards don’t validate me, positively or negatively. It’s like reviews. You can get ten different opinions about the same performance, ranging from great to not so good. So, I don’t really listen to people’s opinions. Instead, I just set a standard for myself. And what I was trying to do with the award was to show my appreciation of Jack Lemmon and, like I said, God laid it on my heart. To me, there’s really no such thing as a best actor, just as there’s no such thing as a best artist. Rembrandt… Van Gogh… Picasso… Who’s the best? You can’t really say. They each have a different style, and you might prefer one to another. But that doesn’t mean any one is the best. So, I don’t ascribe to the whole idea of voting one artist as the best. I think that tends to undermine the purpose of art.

KW: Harriet asks: With so many classic films being redone, is there a remake you’d like to star in?

VR: Yes, Brother John, a very old Sidney Poitier film I caught one night  It didn’t do well. It was barely seen. He plays a Christ-like character who returns to the small town where he was raised. You have to check it out.

KW: Will do. Steve Kramer asks: How would you describe your work ethic today?

VR: I’m learning to work now, and I’ll use the analogy of working out in the gym. When I was 25 or 30, I worked out one way. Now, at 56, I work out another way.What I think I’ve learned to do is use my energy more wisely. I’m a better actor now in terms of conveying the dramatic arc of a character and my overall intention. Because I’m more seasoned, I know my instrument better. And often, less is more. That’s the major lesson I’ve learned. A lot of young actors expend energy unnecessarily on things that don’t need that much energy.

VR: Braiding my mother’s hair. I was the baby in the family, and she taught me how to braid her hair. What she would do was give me a brush when she wanted to take a nap. That way, she could get some rest, and know I wasn’t getting into any trouble. That’s one of my fondest and most powerful memories.

VR: Mom! My mother has always been the one person on this planet who has always been supportive of me and believed in me when maybe a lot of other family members didn’t. So, her faith in me is the main reason why I’m where I’m at today.

VR: Peace on Earth. I’m especially talking about all the violence we’re witnessing today with police officers and black youth. I would just say peace, an end to all violence.

VR: Yes, what is the secret to life?

KW: Okay, what is the secret to life?

VR: I can’t speak for anyone else but, for myself, I have to help people and love people, sometimes, in spite of themselves.

VR: I carry very little cash. Honestly, I don’t normally even travel with a wallet. So, I’d have to say just a credit card.

KW: Thanks again for the time, Ving, and congrats on the success of Rogue Nation. .