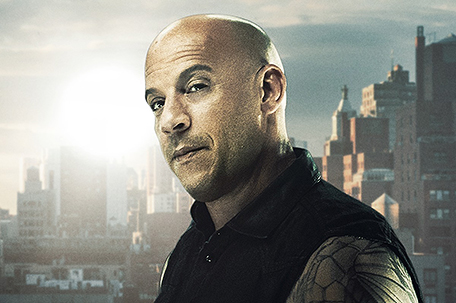 A native of New York City, Vin Diesel is one of Hollywood’s hottest movie stars. In addition to his huge box-office success, Vin is a prominent producer and filmmaker and has been honored with both a Hands and Footprint Ceremony at Grauman’s Chinese Theatre as well as a star on the Hollywood Walk of Fame.

Kam Williams: Hey Vin, thanks for the time.

VD: What happened, bro? I thought you were going to be here today?

KW: Couldn’t make it into the city, so I have to do the interview by phone. You know, I was just talking to my brother who mentioned that he taught your nephew Tyler who graduated from Brooklyn Friends School last year. He said he’s a great kid that everybody loved.

VD: [Laughs] Totally! It is America’s answer to James Bond, for sure.

KW: It even has a bevy of beauties in Deepika Padukone, Ruby Rose, Nina Dobrev, Hermione Corfeld and more, “xXx’s” equivalent of Bond girls.

VD: I remember when we were in production. there were some articles written saying that this was the best cast ever assembled. It’s so eclectic. The women are so strong and formidable and beautiful. They kick ass in their own right. And then it’s novel and cool that this is a multi-cultural, global cast from different film markets from all over the world. It marks the start of Hollywood venturing beyond the confines of Hollywood to recruit talent. We now have a global audience. It is no longer the case that we’re just making movies for America. Now, we’re making movies for the world. So, why not invite celebrated talent from those respective markets into your global film?

KW: And they all mesh seamlessly, here. I’ve seen my share of movies with international casts where there’s no chemistry.

KW: But you’ve pulled it off successfully.

VD: Time! These other studios can get very Mafia. Universal never wanted me to make this movie. They would just love to keep the golden goose at Universal, and just keep turning out their billion-dollar franchise, from my being the brainchild of it, to then going on set and producing and acting in it. So, it really was a matter of time where I had one little window of opportunity at the beginning of 2016 where I could go make the movie. And we just went for it! To be 100% honest, that how Hollywood is nowadays. Most people don’t realize that. These studios can be very proprietary.

KW: Really? I had no idea. I thought the studio system ended back in the Forties.

VD: You wouldn’t think it, because Universal would never admit it. I’m not their movie star. I’m their George Lucas. I’m the person creating the saga through many, many pictures. But they’ll never tell you that. They’ll pretend that I’m just coming to the set and driving cars. They’re not going to acknowledge that I’m also the one who’s creating this full, intricate saga, and DMing it over the years. Anybody that’s on the inside would tell you that. Hollywood can get ruthless. I just shared some of the inside scoop, since I’ve known you for a long time. But that’s how Mafia this is.

KW: Thanks. You know who else was great in this movie? Tony Gonzalez, the former NFL star.

VD: Wasn’t he good? He’d never acted before. This was his first feature film. You’re talking about one of the best football players in history, and he walks onto the set and just kills it! Tony Gonzalez was incredible. He enhanced the picture.

He brought something to the table. His work ethic was dope! And when he wasn’t filming, you’d find him standing around the set trying to learn everything he could. You could see what a winner he is, and why he was a winner in his field.

KW: I think he was even a star basketball player in college.

VD: He was! When you have that dedication it shows. He did not hold anything back. I’m so proud of what he accomplished.

KW: The rest of the cast was good, too.

VD: I’m proud of all of them. Hey, I’m gonna share this text from my sister [Samantha Vincent] only with you, Kam, since I know you so damn long. She produced this picture, and produces the “Fast & Furious” franchise. Hold on a second, man… Here it is. She goes: “Seriously, in all my years working with you, I don’t think I’ve ever seen such a unified, hard-working cast. It’s literally the most hopeful, open, optimistic, present group of people ever.” That’s from my sister who’s always on the set and producing all these movies. Ain’t that hot?

KW: Absolutely! Thanks for the exclusive, Vin. Harriet Pakula-Teweles asks: With so many classic films being redone, is there a remake you’d like to star in?

VD: Oh my God! Just hearing you ask that makes me think of a bunch of remakes I’d love to do. “It Happened One Night…” “On the Waterfront’s” is one of my all-time favorite films. And there’s something to be said for “Mr. Smith Goes to Washington.” I’d love to put a multi-cultural spin on all those movies.

VD: Well, the first movie I remember was a picture called “The Thief of Baghdad.” It was directed by Michael Powell and starred an Indian actor named Sabu. When I was a kid, we couldn’t afford to got to concerts or Broadway plays. That was way out of our price league. But we could go to the movies. we’d go to 42nd Street, and share a $1.50 bowl of chicken lo mein before going to see a movie. Since we lived in Manhattan, we’d walk home afterwards. And while walking home, my father would always break down the movie we just saw. He started doing this when I was just 5 years-old. that gave me the ability to be a producer. As you know, before I did “Saving Private Ryan,” I directed “Multi-Facial” and “Strays.” I would never have gotten “Private Ryan” if I hadn’t made those movies. And in some ways, I never stopped directing.

VD: Wow! That’s a great question. When I’m at home, I’m just Daddy. I’m at peace, and not self-aware at all. On the red carpet, I’m a commodity. I realize that, for that moment, I belong to the world, in a way. I try to maintain my truth and my individuality, but I’m mindful that anything I do or say could easily be misconstrued. They’re two very different worlds. I don’t even know if I could articulate just how different they are in one conversation. The person I am at home is so at peace. But even my family knows that once I go out those doors I belong to the world.

KW: I would guess that you have to be even more careful about what you say and protective of your privacy between the 24-hour news cycle and the snarkiness of internet trolls. .

VD: Yeah!  Who the hell knew we were going to have to become governors of our fan base, and have to manage so much social media, and decide what you’re going to share. A decade ago all this didn’t exist. Now, you’ll find Samuel L. Jackson feeding his social media.

KW: I’m glad you brought him back for this sequel.

KW: This movie has a number of great twists that it would be unfair for us to spoil.

VD: Yeah, the twists are fun. You can go to the movie and have a blast, but there is also a message after the dust settles.

KW: Thanks again for the time, Vin, and best of luck with this film .

VD: Always good to talk to you, Kam.

KW: I look forward to chatting with you about “Fast & Furious 8” in the spring.

VD: Next time, come over here, man, and let’s do a face-to-face.

From fighter to lover, Laz Alonso lays down the charm