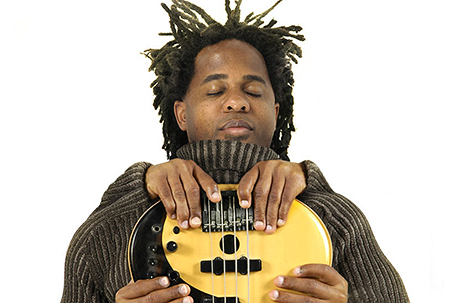 The dynamic band Béla Fleck and The Flecktones, was founded in 1988. Known for their eclectic sound, complex arrangements and seamless blend of various genres, The Flecktones created a sound uniquely their own. In honor of their 30th Anniversary, the group is embarking on a national tour. Founding member and legendary bassist Victor Wooten spoke with the SUN about The Flecktones longevity and the importance of giving back.

Wooten is the epitome of a Renaissance man. The five-time Grammy Award Winning, musician, composer, author and teacher has become a staple in the music world for good reason. Wooten shared how his journey with The Flecktones began.

“I was visiting a friend in Nashville in 1987… he introduced me to Béla. Not long after that, Béla told me about a tv show that he had been asked to do, where they were going to put together an hour-long program of his music. He asked me to play bass and I said absolutely”, Wooten shared. “He started telling me about this harmonica player named Howard Levy that he met from Chicago. He wanted to get Howard for the show. He thought, ‘if I had a drummer we’d have a band and we could put together some music.’  I told him about my brother, who was doing something totally different with the drums. Béla hired him and that was the beginning of The Flecktones. We didn’t know it yet, but that’s how it started… with one television show and here we are 30 something years later.”

Not only is Wooten an incredible musician, he comes from a family of extremely talented musicians. Wooten spoke about his experience working with his brother Roy “Futureman” Wooten, the group’s percussionist and drummer.

“It’s been amazing and regular at the same time, because it’s all I know. I became a better musician when I learned to play with other people than my family, but playing with any members of my family brings it right back home and makes me feel totally comfortable.”

Wooten has made it a point to share the knowledge he’s acquired during his many years in the music business with other musicians. Wooten teaches at Berklee College of Music in Boston every month. He recently returned from playing and teaching at the Berklee campus in Valencia, Spain. Wooten also runs a music camp just west of Nashville. Wooten offered his perspective on the importance of giving back.

“I do it to help people and also to help music move forward. Music shouldn’t end where we left it, younger people should take it further,” he said. “I want to make it easy for them to surpass us. It won’t always be easy. They’re going to have to forge their own pathways… but the quicker they can surpass me… the further music will go and that’s what we want. I just like helping people.”

As an author, Wooten has gifted musicians and music lover yet another source of information with his book.

“My book “The Music Lesson: A Spiritual Search for Growth Through Music” came out in 2008 and it has surpassed my expectations. Lots of schools and universities around the world have been using it, and that makes me happy. I didn’t write it for that reason, but it’s nice when things go further than you dreamed”, Wooten reflected. “It’s a different look on music. It’s a novel, it’s also a story about a teacher and a student. It’s amazing that people have really taken to it, because they’ve said it frees them up. They read the book and say, ‘I want to go do this, I want to play’ and that’s great… that’s exactly what I want. Life has been good and it’s allowed me to share my ideas as well as learn new ones.”

With a reunion tour celebrating 30 years and counting with the Flecktones, Wooten shared his gratitude.

“It’s just great to be together and knowing that we’ve been able to do anything for that length of time, especially to be successful at it, is amazing to us… and we still like each other 30 plus years later” he said. “For me one of the things that makes it the most (I don’t know what the word is) exciting and fun but it’s more than that… is the fact that we got together just to do one show. We couldn’t get enough, we still can’t get enough and fortunately the friends and listeners still support us. We’re thankful for that.”

“Anyone that knows that music will get to hear it fresh, because we’re different so the music will be different”, Wooten added. “It’ll definitely be fun and you’ll be able to tell how much fun we’re having with each other. You’ll also get a very high level of artistry. Our artistry mostly comes through music, but hopefully it’ll inspire you to do whatever your art is.”

In addition to the tour with The Flecktones, fans of Wooten can also look forward to a plethora of additional upcoming projects.

“Our 2020 camp season has just been posted… this will be our 21st season. People can look online at www.vixcamps.com. We do camps from May through October and different ones every month. I also just finished writing my second concerto for bass and orchestra and I’ll be performing that in May as a debut in Chicago with the Chicago Sinfonietta. The sequel to my book The Music Lesson, if all goes well, will be coming out in fall of 2020. That’s called The Spirit of Music, so people can look forward to that.”

Be sure to follow Victor Wooten online at www.victorwooten.com and on social media @victorwooten.  Béla Fleck and The Flecktones will be performing at The Kimmel Center on Tuesday, December 3, 2019 at 7:00pm. Visit www.kimmelcenter.org for more details.