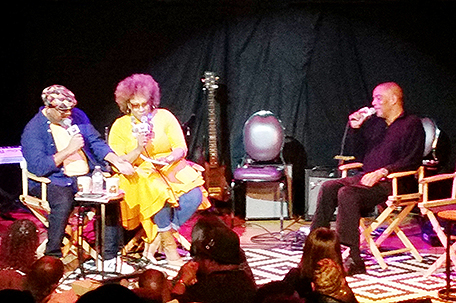 ABOVE PHOTO:  Veteran broadcaster and author Paul Porter (right) is interviewed by Kindred the Family Soul on his new book “Blackout — My 40 Years in the Music Business”   (Photo courtesy: Amy V. Simmons)

Veteran broadcaster Paul Porter was in town on March 12th to promote his book “Blackout — My 40 Years in the Music Business” as part of the popular “Kindred Presents”conversation and performance series hosted by Kindred the Family Soul at the Clef Club.

The sold out event also featured interviews with Professor Griff and his wife Sole’, Ledisi, and Allyson Williams. Ledisi and Williams also performed a short, powerful set each, which was received well by attendees.

Porter’s book chronicles his experiences as a broadcaster for some of the nation’s top radio stations. During his 10 year stint at BET, he was an on-air presenter, program director and consultant.

Over the years, Porter became increasingly disturbed by the direction that the industry was going — especially regarding the continued influence of payola “pay for play”schemes, unchecked violence and misogyny in rap music CDs  and videos, and the corporate takeover of Black radio and music overall.

“Loss of consciousness…that’s what the title “Blackout” means, because we’ve lost it when it comes to messages,” he told the audience. “We went from lyricists to the lyrically challenged…generations are growing up on garbage.”

“Back in my neighborhood, there were a couple of guys whose fathers were in the music business.” Porter continued. “James Brown lived up the street. So music just got into my soul early. This book is the story of Black music and Black culture…the real side, not the big money side. It’s about how folks get on the radio.”

Porter told the audience about his first direct experience with the illegal payola process when he took on the role of programmer at BET.

“The first weekend I was in the hotel — Hotel George, right there in Union Station — I got a FedEx,” he said. “The FedEx had 30 grand in 100 dollar bills.. It was “welcome to programming.” It happens like that 24/7 to this day…radio stations will tell you when they’re doing a promotion, like ‘this trip is paid for by Universal Records’, but they don’t tell you [during] the 140 times that you hear it [a payola influenced record] in seven days is because somebody got stroked with cash.”

Porter recently bought his own hip hop/R&B radio station in Orlando, Florida called The Wire 98.5 and is selective about what records he chooses for airplay. He admonished to crowd to “wake up” and become aware of some of the damage that is being perpetuated via some of today’s most popular mainstream rap and hip hop lyrics.

“A lot of kids are being blindsided,” Porter said.

“My station in Orlando is in Pine Hills, Florida,” Porter said. “They call Pine Hills “Pine Kills.” Within the first 30 days of the radio station, we had 13 homicides in the first 13 days within a three-mile radius. That’s why I wanted that station. It was in the worst part of Orlando, and I knew nobody was going to go for the license.”

The station is doing extremely well.

Porter also expressed concern about the current direction taken by some of those in the Black radio business who have traditionally played the role of gatekeepers and community advocates.

“I worked for Bob Johnson, Cathy Hughes, Frankie Crocker. Just being Black does not cut it, because a lot of people change. When Cathy Hughes started in DC, she was about information and power, and it turned into straight money. It hate to say it, but it’s going to take more than gatekeepers. It’s going to take people who have hearts and souls that care about the audience that they broadcast to.”

Porter concedes that he became part of the problem over the years, playing records with lyrics that increasingly grew violent, misogynistic and destructive without giving the whole trend a lot of thought.

“When I was in New York working at Hot 97, the record that changed me and gave me my epiphany was a Rah Digga record with a chorus that’s got ‘beat that b***h with a bat’ in it.” he recalled. “When a 12-year-old girl came up to me with a note and said ‘Mr. Paul, could you get the record off the radio?’ I said ‘Why, Latia?’ She said ‘Because my daddy beat up my mama with a bat. She’s in Roosevelt Hospital.’” 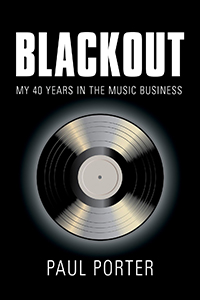 This shook Porter to the core.

“I got the record off the radio, and two weeks later, the got me off the radio, “he recalled. “Ever since then, I’ve been doing my thing, trying to wake up minds.”

Porter’s mission — which began with co-founding non-profit advocacy groups Industry Ears and Rap Rehab — has lasted for 15 years. His expose of the industry during that time has not been without a cost to him professionally as a result.

“I had a six- digit book deal with Harper Collins.” hesaid. “It was called ‘The Same Songs — Power, Payola and the Music Industry.’ They killed that book, because I told Clive Davis stories and “so and so” stories.  They gave me 100K to keep the book. It took me seven years to put the book out by myself.”

Porter spoke about  how independent artists need to take charge of their careers and be more assertive about putting themselves out there. He says that unless artists (and their supporters) go to local radio stations and demand airplay, the stations will continue to get away with current practices.

“These stations are licensed to serve the community, and they don’t,” He said. “That’s because we let them slide.”

Porter feels strongly about mentoring up and coming performers,about the fans who support them, and about encouraging all to use discernment and critical thinking when creating and consuming the music.

“When you fill folks minds with power, energy and knowledge, there’s no way they reject it… if you turn them on to something better, and tell them why it’s[their record] not playing, then they come in… you’ve got to come to their level and understand that there’s some dope rhymes out here. There’s some lyricists that I love. But there’s [also] some straight garbage,” he said.

“Blackout — My 40 Years in the Music Business” has been endorsed and recommended by many of Porter’s colleagues, broadcast and music industry peers, including Wendy Williams, MSNBC host Joy-Ann Reid, Snoop Dogg and Chuck D.

The book is available for purchase at www.BlackoutTheBook.com. For other inquiries, email: [email protected]