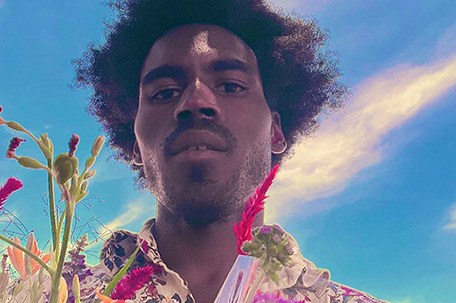 For some creativity is innate. Vernon Jordan, III is one of those people.

Jordan is a filmmaker, poet, writer and teacher. The Philadelphia native and Afrofuturist continues to lend his voice as a visual lyricist to telling stories about the African American experience. After graduating from Muhlenberg College, earning a degree in his self-made major called Black Voice & Cultural Studies, Jordan’s thesis film, “See My Dreams Come True,” went on to be recognized nationally and internationally at various festivals.

Jordan went on the gain his MFA in screenwriting from the Feirstein Graduate School of Cinema. His work as an actor has been featured on HBO/Tribeca and Hulu, while his work as a writer allowed him to advance to the final consideration round at the Sundance New Voices YouTube Episodic Lab. He is currently using his collective experiences in the industry in his role as the assistant director of programs for CinéSPEAK. Jordan spoke with the SUN about the work that CinéSPEAK is doing in the community and their exciting fall film lineup.

Jordan’s love for creativity began early and was fostered by a creative family.

“There are these stories,” he recalled. “Sometimes, my god mom or my dad [would put the cassette tape on, and before you knew [it, there were] full sentences, and you would be singing these words. So, part of it is art just really helped to grow me — grow me up literally. Then as I came of age I just started to realize, ‘oh my God… movies are so cool, writing is so cool, poetry is so cool, I just kind of want to do it all.’”

Jordan grew up to do just that exploring all of those passions. He eventually found his way to CinéSPEAK.

“I was being onboarded in March or April of 2021,” he said. “Sarah Meuller the founder and director emailed me and said ‘I have this role that I think you’d be great for — let’s chat.’ We had a phone conversation, and it was just amazing. I met Sarah around the time when I was doing work with Big Picture Alliance and Freedom Theatre — I was 16 or 17. We just kind of stayed in touch across social media. She knew I was still doing film stuff and I knew she was still in the Philly music event scene. She told me about everything that CinéSPEAK was looking for and what she was looking for, and I said ‘oh yes, I’m so excited! All l I think about is movie pairings and I would love to do that kind of work.’ It was right on time.”

CinéSPEAK, based in Philadelphia is a cinema and film publication that seeks to center and share the stories of people and communities that are often underrepresented in mainstream film spaces.

“CinéSPEAK is an indie arthouse movie theater and film publication,” Jordan said. “That means typically we play a lot of not super experimental work, but work that pushes some boundaries of filmmaking and work that doesn’t necessarily look like a Hollywood blockbuster, and we really champion filmmakers. As a filmmaker myself, it’s super important with our programming and everything that we have elements of talkbacks, Q&A’s or some way for the audiences to be able to engage with the filmmaker on a more personable level. We’re really about getting people to be in the same room and talk, share, and be in community.”

There is so much brilliant film content available to the masses. Unfortunately, due to the pandemic, a great deal of that content fell through the cracks. CinéSPEAK used this as an opportunity to shine a light on some of those works.

“When I got hired, it was in the middle of the pandemic,” Jordan said. “I’m using that language but it’s not over. I need people watching this interview to understand that and please be safe, please be careful. But I was hired in the middle (of the pandemic), we had a year of lockdown. When I got hired, Sarah and I talked a lot about films that were missed because the theaters shut down… because people were still figuring out what it meant to have movies just released online or on a streaming service. A whole lot of movies got overshadowed in that 2020 period.”

“For us, when I first got hired, we were looking for those that got overlooked and also what didn’t come to Philly… those were our starting places,” he continued. “The second thing is about theme. Sometimes we’ll be on the phone and we’ll think about what some of the themes are that we want to talk about. Based on that, we kind of go for ‘this season we’ll do this, for this season we’ll do that’ and pick movies based around that.”

This season CinéSPEAK has a wide array of film offerings. The first film — which was shown at Pentridge Station Pop-up on September 23 — is a film called “Alma’s Rainbow.”

“Alma’s Rainbow” is a coming-of-age film created by North Philadelphia’s own Ayoka Chenzira, one of the first Black women to produce a feature film in the states. CinéSPEAK also features works that tell stories from all around the world. “Skies of Lebanon,” a story about a family from Beirut whose family is shaken by war, was shown at Bartram’s Garden on September 29. Jordan shared his excitement for CinéSPEAK’s upcoming screenings.

“Everyone has to come to the “Ganja and Hess” screening on Halloween night. “ he said. “Ganja and Hess” to me is the perfect Blaxploitation film, if I had to use that term. It’s a Black experimental film out of ‘73, directed by Bill Gunn. It’s about blood addiction, where Black people develop this addiction to blood, so they’re sort of these vampire creatures. It’s composed by Sam Waymon, who will be in attendance that night. He’s an amazing musician, an artist and the younger brother of Nina Simone. I’m super excited for that one.”

For the full list of films being screened during CinéSPEAK’s upcoming fall events and for more details on locations and showtimes, visit: www.cinespeak.org/attend/ and follow them across social media platforms @cinespeak. Be sure to stay tuned and support Vernon Jordan, III on his creative journey. Jordan’s latest short film, “One Magenta Afternoon” is currently touring festivals and will be screened in Philadelphia on November 10 at The Paul Robeson House with a moderated Q&A to follow. Follow @VernonJordanIII on IG and @AfroJediii on Twitter to find out more details about tickets and showtimes.