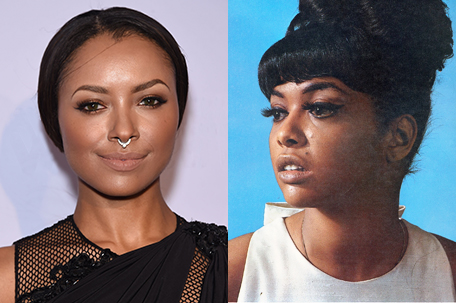 Deadline is reporting that “Vampire Diaries” star Kat Graham will play Tammi  Terrell in an upcoming biopic of the late singer, from writer/producer/director/actress Maryam Myika Day, and produced by Robert Teitel, Rose Ganguzza and Hilary Shor.

Over a 12 month period, starting in April 1967, the super duo of Marvin Gaye and Tammi Terrell enjoyed a string of four straight hits with some of the greatest love songs ever recorded at Motown Records. Sadly, only the first two of those four hits were released while Terrell was still well enough to perform them. In October 1967, just six months after the release of the now-classic “Ain’t No Mountain High Enough,” Terrell collapsed onstage during a live performance at Virginia’s Hampton-Sydney College. Two-and-a-half years later, on March 16, 1970, she died of complications from the malignant brain tumor that caused that collapse. She was only 24 years old at the time of her death, but already had more than 10 years of show-business experience behind her, appearing as an opening act for the likes of Patti Labelle & the Bluebelles, and later joining James Brown’s live revue as a backup singer. In 1965, at the age of 20, she was signed to Motown Records. But it wasn’t until a couple of years later, when Motown decided to pair her with Marvin Gaye while working with songwriters/husband-and-wife team of Ashford and Simpson, that Terrell (along with Gaye) became a star. After “Ain’t No Mountain High Enough” came: “Your Precious Love,” “Ain’t Nothing Like the Real Thing” and “You’re All I Need to Get By.”

Kat Graham said: “I immediately connected to Tammi and her story in many ways and have felt the incredible need to tell it… Tammi Terrell defined passion and soul itself… Getting lost in the music enabled her to override life’s punishments – for when she sang, she could use the hurt to create greatness and give the world hope that maybe they could overcome their pain as well.”

Principal photography on the yet-to-be-titled feature film is set for 2016.