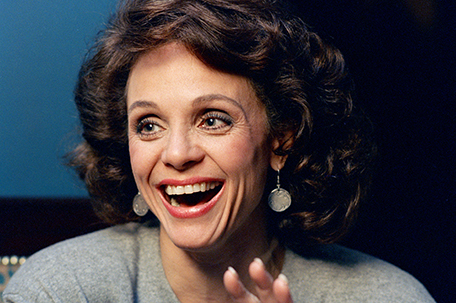 ABOVE PHOTO: Actress Valerie Harper laughs during an interview in New York. Valerie Harper, who scored guffaws and stole hearts as Rhoda Morgenstern on back-to-back hit sitcoms in the 1970s, has died, Friday, Aug. 30, 2019. She was 80. (AP Photo/Ron Frehm, File)

NEW YORK — There was never a better laugh line in all of sitcomania and, in her signature role as Rhoda, Valerie Harper nailed it.

Eyeing a piece of candy with desire yet trepidation, Rhoda cracks, “I don’t know why I’m putting this in my mouth. I should just apply it directly to my hips.”

That was in 1970 in the first weeks of “The Mary Tyler Moore Show,” as Rhoda — and Harper — first stole viewers’ hearts.

Rhoda was lovely and adorable but she had relatable issues with her weight and took refuge in self-deprecating jokes.

Rhoda was for everyone, and she would prove it in back-to-back hit sitcoms that made Harper a breakout star on “The Mary Tyler Moore Show,” then established her as a funny leading lady in her own series, “Rhoda,” scoring guffaws and busting TV taboos as an overweight, brash, Jewish version of the girl next door.

Harper, who died last Friday in Los Angeles days after she turned 80 after a long battle with cancer, won three consecutive Emmys (1971-73) as supporting actress on “The Mary Tyler Moore Show” plus another for outstanding lead actress for “Rhoda,” which ran from 1974-78. She was immortalized — and typecast — for playing one of television’s most beloved characters, who as Mary’s best friend was the equal of Ethel Mertz and Ed Norton in TV’s sidekick pantheon.

Harper’s career cooled after “Rhoda.” Maybe she had done her job too well, becoming indelibly connected with the woman she played.

In recent years, her appearances were mostly limited to voice work on the animated shows “The Simpsons” and “American Dad.” But for years, Harper’s appearances had been mostly in the occasional stage and guest-star TV role.

Then in 2013, she was back in the news, and all over TV, when she revealed that just a few weeks earlier she was diagnosed with brain cancer. This rare condition, leptomeningeal carcinomatosis, occurs when cancer cells spread into the fluid-filled membrane surrounding the brain. (She had battled lung cancer in 2009.)

Harper said she had been told by her doctors she had as little as three months to live. Fans responded as if a family member were in peril.

But while the diagnosis might have seemed like a death sentence, “I’m not dying until I do,” Harper said in a TV interview. “I promise I won’t.”

She continued to work, with guest shots in 2015 on “2 Broke Girls” and “Melissa & Joey” as well as her stage dates. And she outlived her famous co-star: Mary Tyler Moore died in January 2017.

Harper was a chorus dancer on Broadway as a teen before moving into comedy and improv when, in 1970, she auditioned for the part of a Bronx-born Jewish girl who would be a neighbor and pal of Minneapolis news gal Mary Richards on a new sitcom for CBS.

It seemed a long shot for the young, unknown actress. As she recalled, “I’m not Jewish, not from New York, and I have a small shiksa nose.” And she had almost no TV experience.

But Harper, who, even as a dancer had battled plumpness and who arrived for her audition packing a couple of dozen extra pounds, may have clinched the role when she blurted out in admiration to the “Mary Tyler Moore Show’s” reed-thin star: “Look at you in white pants without a long jacket to cover your behind!”

Then, in fall of 1974, the “The Mary Tyler Moore Show” producers spun the character off. Rhoda was dispatched from Minneapolis back home to New York City (“This is your last chance,” she told New York in the opening titles), where she was reunited with her parents and younger sister in a new sitcom that costarred Nancy Walker, Harold Gould and Julie Kavner.

She also met and fell in love with the hunky owner of a demolition firm.

The premiere of “Rhoda” that September was the week’s top-rated show, getting a 42% share of audience against competition including Monday Night Football on ABC. And a few weeks later, when Rhoda and her fiance, Joe, were wed in a one-hour special episode, more than 52 million people — half of the U.S. viewing audience — tuned in.

But “Rhoda” couldn’t maintain those comic or popular heights. A domesticated, lucky-in-love Rhoda wasn’t a funny Rhoda — not the Rhoda who could claim “I had a bad puberty. It lasted 17 years;” not the Rhoda who before a date had been hungry but refused to eat, explaining, “I’ve got to lose 10 pounds by 8:30.”

By the end of the third season, the show’s writers had taken a desperate step to shake things up: Rhoda divorced Joe. Thus had Rhoda (and Harper) defied a third CBS taboo.

The series ended in 1978 with Harper having played Rhoda for a total of nine seasons.

During “The Mary Tyler Moore,” Harper appeared in her first major film, the comedy “Freebie and the Bean,” and later appeared in “Chapter Two” and “Blame It on Rio.”

In 1986, she returned to series TV with a family sitcom called “Valerie.” While not matching her past critical successes, the series proved popular. But in the summer of 1987, Harper and her manager, Tony Cacciotti, whom she had married a few months earlier, were embroiled in a highly publicized feud with Lorimar Telepictures, the show’s production company, and its network, NBC.

In a dispute over salary demands, Harper had refused to report for work, missing one episode. The episode was filmed without her. She was back on duty the following week, only to be abruptly dumped and replaced by actress Sandy Duncan. The show was renamed “Valerie’s Family” and then “The Hogan Family.”

Meanwhile, lawsuits and countersuits flew. In September 1988, a jury decided that Harper was wrongfully fired. She was awarded $1.4 million compensation plus profit participation in the show (which continued without Harper until 1991).

“I felt vindicated,” Harper wrote in her memoir. “I had beaten Lorimar and reclaimed my reputation.”

During the 1990s, Harper starred in a pair of short-lived sitcoms (one of which, “City,” was created by future Oscar-winner Paul Haggis) and made guest appearances on series including “Melrose Place,” “Sex and the City” and “Desperate Housewives.”

She reunited with Moore in a 2000 TV film, “Mary and Rhoda.” And in April 2013, there was an even grander reunion: Harper and Moore were back together along with fellow “The Mary Tyler Moore Show” alumnae Leachman, White and Georgia Engel to tape an episode of White’s hit comedy, “Hot in Cleveland.” It was the ensemble’s first acting job together in some 36 years.

The character of Rhoda “taught me to thank your lucky stars for a fabulous friend,” Harper noted during a news conference, referring to Mary Richards and pointing to Moore and laughing.

Harper is survived by her husband, Tony Cacciotti, and daughter, Cristina Cacciotti.