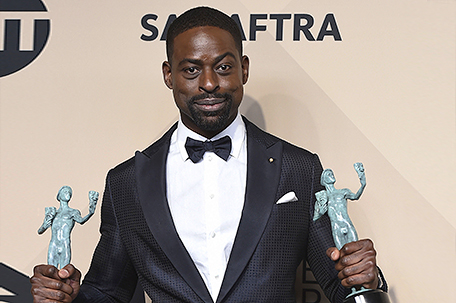 LOS ANGELES — “This Is Us” won the top drama series trophy at last Sunday’s Screen Actors Guild Awards, making up for the Emmy and Golden Globe honors that eluded it and taking a stand for broadcast network TV amid growing online competition.

“The people that watch with us every Tuesday night and embrace this show that reflects positivity and hope and inclusion, we love you,” said Milo Ventimiglia, accepting the award for best drama series cast on behalf of his co-stars in the time-tripping show about a racially blended family.

It overcame formidable non-broadcast competition, including streaming service Hulu’s “The Handmaid’s Tale,” which is seen by its admirers as a political parable for today and won multiple Emmys and Globes.

“This Is Us” star Sterling K. Brown was honored as best TV drama series actor, becoming the first African-American to win in the category. He broke the same barrier with his best-actor Golden Globes award for the role of Randall Pearson earlier this month and won a 2017 Emmy Award for it.

“What a blessing it is to do what you love for a living. What an honor it is to be recognized by your peers for a job well done,” Brown said. The actor, whose character on the show was adopted by a white couple, dryly thanked this TV family for being nothing like the one in the horror movie “Get Out.”

Claire Foy won the trophy for best TV drama series actress in “The Crown,” in which she plays a young Queen Elizabeth, while Julia Louis-Dreyfus captured her third SAG award for her role as a failed politician in “Veep,” which was honored for best comedy series cast.

Neither actress was on hand to accept the award. Louis-Dreyfus, who has been battling cancer, is working on a play, the audience was told.

William H. Macy, who stars as a deeply flawed patriarch in “Shameless” captured a third trophy for his role. He used his speech to drive home a political point, calling it the privilege of actors to use fiction to bring honesty to their audiences.

Actors are able to “find the truth, and I think it’s a glorious way to make a living — especially in this day and age when so many people either can’t recognize the truth or don’t think it’s important,” he said.

Two of the night’s TV nominees, Geoffrey Rush of “Genius” and Aziz Ansari of “Master of None,” are among the Hollywood heavyweights facing various degrees of sexual misconduct claims. Rush attended the ceremony; Ansari, a Golden Globes winner this month, did not. Neither won.

Nicole Kidman, carrying her awards sweep for the female-centric TV miniseries “Big Little Lies” through Sunday’s SAG Awards, said the entertainment industry must stand with women if they are to continue exercising their power.

Kidman added SAG’s best female actor trophy to Emmy and Golden Globe awards for her portrayal of an abused wife. She also produced the drama with Reese Witherspoon, her co-star, a sign of the growing strength of women that Kidman said isn’t a given.

After reciting a long list of veteran actresses she admires, including fellow SAG nominees Susan Sarandon and Jessica Lange, she called it “wonderful” that “our careers today can go beyond 40 years old. Because 20 years ago, we were pretty washed up by this stage in our lives.”

The actresses she gave a shout-out to are proof that “we’re potent, powerful and viable. I just beg that the industry stays behind us because our stories are finally being told,” she said.

Alexander Skarsgard, who played Kidman’s husband in “Big Little Lies,” won the best male actor trophy for his role, and was sheepish accepting it and making acclaimed fellow nominee Robert De Niro a runner-up for “The Wizard of Lies.”