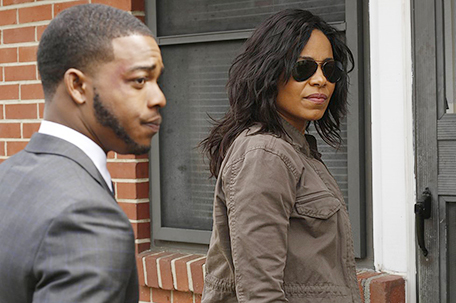 ABOVE PHOTO:  Sanaa Lathan and Stephan James in a scene from the new Fox crime drama “Shots Fired.”

By Aramide A. Tinubu

Every other week it seems, I awake to news that another unarmed Black person has been slaughtered by law enforcement. Whether it’s a teenager turning his back, a young mother clutching her small child, or a man waiting with his stalled vehicle, the narrative has become a horrific cycle of death, videos and no repercussions for the police. This death and violence are a part of America’s framework, and it’s always been here. It’s simply more visible in the age of advanced technology and social media.

Visionary storytellers Reggie Rock Bythewood and Gina Prince-Bythewood have decided to combine the art of storytelling and activism in order to say something about the state of our very broken country. In a ten-hour miniseries event that for the couple was inspired by their sons, Fox’s “Shots Fired” goes well beyond a hashtag. The gripping story which stars Sanaa Lathan (“Love & Basketball”), Tristan Wilds (“The Wire”), and Stephan James (“Selma”), flips the usual narrative on its head. Wilds stars as Deputy Joshua Beck, a Black police officer who kills an unarmed white college student, and is now being deeply scrutinized in the national media and in his North Carolina small town. Further exacerbating the situation is the fact that Beck is the sole Black officer on the police force.

Lathan, in what might be the most multidimensional and gripping role she’s ever played, stars as Ashe Bell, a fixer and private investigator hired by the Department Of Justice. Ashe and special prosecutor Preston Terry (James), embark on a quest to find out what actually happened on the day Deputy Beck pulled the trigger. When a civilian is shot by the police in real life, we see the video (if there is one), hashtags on social media, press conferences, and protests. “Shots Fired” opens just after the trigger is pulled, and we get an in-depth look at the police scrambling to shield the public from the crime scene. The series looks at how such a devastating incident profoundly affects not just those closest to the victim, but how it ripples throughout a community, spreading out into our nation, scaring us all again and again.

The Bythewoods choice to set their story in North Carolina is also extremely important. As one born and raised in Chicago– and currently a transplant New Yorker, I haven’t spent much time in the South.  And yet, the images of the segregated and impoverished communities in this town are not unlike the ones from my hometown, (aside from the abundance of Confederate flags). The political climate of the town also plays a pivotal role in the story. Academy Award winner Helen Hunt stars as the first female and first Democratic governor of North Carolina, adding an entirely new angle to the series. Besides the community, which includes the church, the police, and the town’s citizens, “Shots Fired” also goes in depth into the lives of Ashe and Preston.

A “tough as nails” investigator, Ashe’s life isn’t as together as it first appears to be. On the other hand, Preston is fairly naive about his role in the case, chosen by the Department of Justice not simply because of his tenacity, but for the color of his skin. I was most pleased to see DeWanda Wise, whom I adored in Tahir Jetter’s “How To Tell You’re A Douchebag”. In this miniseries, Wise plays a heartbroken mother grieving the loss of her son at the hands of the police.

After screening only the first hour of the series, I was amazed at all of the different intricacies of the community that the Bythewoods were able to carve out in such a short amount of time. The first episode was just a road map, which left me reeling. I don’t know much yet, but I do know something absolutely sinister is occurring in this small town North Carolina police department. Whatever is at play is completely crippling the Black community which consists of sixty-five percent of the town’s entire population.

By the end of the heart-stopping episode, I was left with way more questions that answers, but then again I suppose that is the beauty of having an event like “Shots Fired”. This series will force those who have continually turned away from this very real narrative to pay attention to it.