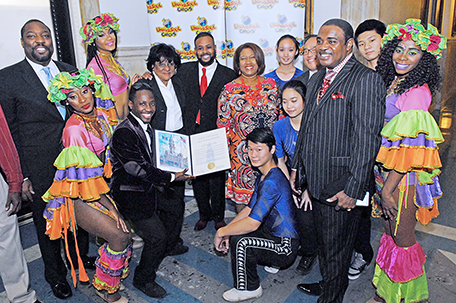 ABOVE PHOTO:  Phila. City Council members are surrounded by UniverSoul Circus acts during last week’s press conference welcoming their visit to the City.  UniverSoul was also presented a proclamation in their honor.  (Photo by Bill Z. Foster)

That’s because the Universoul Circus was in City Council chambers to celebrate its return to the city, which began on Oct. 22nd and will leave it’s location near the Mann Music Center on Nov. 15.

City Hall was filled with talented acts from all over the world to celebrate the return of the Circus with plenty of Soul to spare. The circus’s Senior Executive Lydia Syed (who said that Philadelphia was Universoul’s favorite place to perform) and a host of Philadelphia politicians including Councilman Curtis Jones, Councilwoman Jannie Blackwell, State Rep. Vanessa Lowery Brown, Councilman David Oh, and Councilman Kenyatta Johnson were on hand to show their support.

Founder Cedric Walker once was a concert promoter but envisioned a way to bring families together for entertainment and an experience that could be cherished for years to come, so he started the Universoul Circus in 1994.  Now in its 21st year, the show is still just as amazing as it was back then, with even more thrills for everyone in the family to enjoy.

There are so many themes taking place through the circus, as they are busy making sure everyone from every background has a wonderful time.  A show for youth in support of the Your Life Matters group was held at 3:15 on Oct. 28th and featured Councilman Johnson. The Universoul Circus has designated a Your Life Matters Youth Day since beginning it’s current tour in January.

November 12th will feature a spiritual centered theme with Praise Under the Big Top presenting the Spiritual Leadership Award to Bishop Thornton.  They are also making plans for a veteran’s themed show for Veterans Day, Wednesday, November 11th.

Rep. Brown illustrated the importance of the Universoul Circus to children, particularly children of color, with the story of a child she mentored and took to the circus. That child ending up becoming Universoul’s chef and is now a sous chef in Las Vegas.

The Circus’s motto is “One globe, one love under the big top.” And there is definitely a global feel to this circus with acts from South Africa, Trinidad and Tobago, and China to name a few.  Councilman Oh served as guest ringmaster last Saturday or the Asian American audience, and again on Wednesday.

Ringmaster Lucky was offered a citation from Councilman Curtis Jones and was jokingly promised that they will never have to go back to Camden, NJ again.  Lucky explained that if he was not with the circus, he would make his home here as he loves this city so much.  Make sure you join in on the fun while the circus is here, you don’t want to miss it!