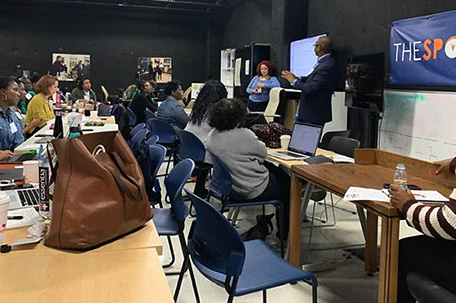 It’s no secret that Black journalists are underrepresented within newsrooms across the nation — especially in terms of specialized investigative journalism.

In March, a dispute between CNN and the National Association of Black Journalists (NABJ) went viral after NABJ, the Congressional Black Caucus, Color of Change, the National Newspaper Publishers Association and the NAACP called out CNN’s president, Jeff Zucker, over the network’s scarcity of Blacks in senior management positions within the company’s news department.

The dispute brings national attention to the lack of newsroom diversity and inclusion that exists within most news organizations across the country.

Challenging these disparities and presenting new opportunities for journalists of color, the Ida B. Wells Society for Investigative Reporting, is embarking on a nationwide training program. The program’s primary goal is the development of Black investigative journalists, the specialty where Blacks are most underrepresented within newsrooms throughout the United States.

“In a time when mainstream newsrooms remain disproportionately White, where racial inequality continues to permeate every aspect of American life, and where investigative coverage of racial injustice is still lacking, the Ida B. Wells Society hopes to help steer more journalists towards the tradition of our spiritual founder,” reads a passage from the Society’s creation story.

Ida B. Wells was an iconic Black female journalist whose investigative reporting exposed lynching in the late 1800s on a national and international level. The Society which bears her name and whose motto is, “Be Twice as Good,” recently hosted an investigative journalism workshop at Morgan State University, a historically Black university located in Baltimore.

“Bringing programs like this is important to our institution,” said Hamil Harris, a former Washington Post reporter and current Morgan State University Journalism Professor. “I really enjoyed being able to see different generations come together with a similar purpose of engaging and talking investigative journalism. This was an excellent session and I think everyone involved got a lot out of it.”

Delving into topics that included: sourcing techniques, paper trails, leveraging state and federal Freedom of Information Acts (FOIA), gun reporting and effective ways to pitch and manage projects, the two-day training session was led by the Society’s co-founder and a current international investigations editor for the Associated Press, Ron Nixon, who emphasized preparation.

“I could talk to you all day about various reporting techniques, but if you don’t have the background research, it’s all just kind of a waste,” Nixon said.

“Know your subject. Research their backgrounds, what they did and what they do. This will help when figuring out their motivation for even being interviewed and always practice your questions… this will allow you more opportunities when asking questions.”

The training concluded with an in depth review of data journalism, a specialty area that is often overlooked but necessary for precise and accurate story-telling.

For more information about the Ida B. Wells Society, visit: www.idabwellssociety.org.