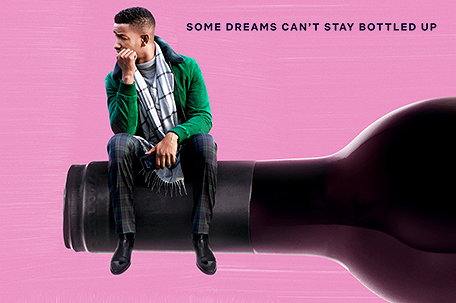 When it comes to the world of wine, we don’t see Black people represented as often as they should be.

The Netflix original film “Uncorked” gives audiences a view into the world of wine and does so through the lens of a young Black man.  The film tells the story of Elijah, a young man who has dreams of becoming a master sommelier. His dreams are in direct conflict with his father’s desire for him to take over the multigenerational family BBQ business passed down from his father.

“Uncorked” begins with Elijah in his element, working at a  local wine business in Memphis. He splits his time between working there and at the local family BBQ restaurant. It is immediately apparent that not only does Elijah know a lot about wine, but he loves to teach other people about it as well.

After attending a  mixer as part of the wine club at work, a spark is ignited in Elijah. He decides to pursue his passion by going to school to become a master sommelier.

Elijah thoroughly enjoys the journey and the process of learning all about wine. He finds himself in a study group among new friends Harvard, Richie and Leann. His school offers his class an opportunity to study abroad in Paris, but Elijah doesn’t think he’ll be able to go because of the financial strain the cost of the trip will cause. However, Elijah’s friends encourage him to go. Harvard even goes as far as offering to split the cost with Elijah, if he can come up with the other half of the money. Sylvia, being the unwavering support system that she is, organizes a family fundraiser to help Elijah get the rest of the money.

To become a master sommelier requires a tremendous amount of work, dedication, attention to detail and comes with an immense amount of prestige. To earn a diploma as a master sommelier is the highest achievement a professional can earn in the fine wine and beverage service — there are only 230 of them in the world.

In order for one to earn that achievement, one must have vast, yet very specific knowledge in tasting, theory and service. This journey, already coming with a monumental amount of challenges, is made even more difficult with the constant opposition Elijah receives from his father.

“Uncorked” not only explores the world of wine, but it partners that journey with nuances that parallel a constantly evolving relationship between Elijah and his father Louis. The audience has an opportunity to see their relationship evolve largely through the never-failing championing of Elijah’s mother, the foundation of their family. Sylvia, a cancer survivor whose cancer returns, serves as a grounding rod. She sets such a foundation for her family that Elijah and Louis can find their way to common ground, even if she won’t be there to help them navigate. Through love and mutual respect, they eventually find their way.

“Uncorked” does an outstanding job at depicting the shift in the parent/child dynamic from ‘this is what I want you to do, so you’re going to do it,’ to understanding that while children are extensions of their parents, they are also fully actualized individuals with their own desires. Louis eventually realizes that passing on his father’s legacy does not trump his son’s dreams. He finally sees his son’s talent,and not only acknowledges it, but supports it.

“Uncorked” brilliantly takes audiences through the wonderful world of individual growth. Each character grows, at their own pace, but does so in a way that coincides perfectly with where they each fall in the story’s timeline. This film takes the viewer on a rollercoaster ride of emotions, but is still firmly planted in reality.

Although Elijah has to overcome insurmountable obstacles to achieve his dream of becoming a master sommelier, this story is not a fairytale. “Uncorked” serves as a reminder that just because someone is talented, or they want something badly, doesn’t mean they won’t have to fight for their dreams. The audience sees Elijah fighting for his dreams repeatedly.

The performances of the cast members are absolutely phenomenal. The chemistry of the cast is compelling, the script is intelligent, and the perfect balance of laughter and heartfelt moments makes this film incredibly enjoyable to watch. “Uncorked” is an unapologetically Black story, told through the eyes of Black people who are simply existing while trying to find their way to fulfillment, both personally and professionally.

“Uncorked” is currently streaming on Netflix… it’s a must see!