UNCF celebrates 75 years of lighting the way to better futures 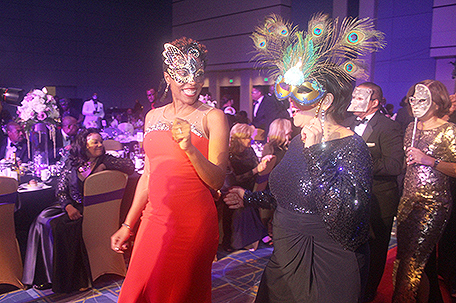 ABOVE PHOTO: Lovely ladies in the Parade of Masks during the UNCF Mayor’s Masked Ball. (Photo: Robert Mendelsohn)

Throughout the past 75 years, UNCF (United Negro College Fund) has helped nearly half a million students earn college degrees. As the largest and most effective minority education organization in the United States, UNCF also actively supports 37 private Historically Black Colleges and Universities (HBCUs) and advocates for minority higher education. As it marks such a major milestone, UNCF is planning a year-long celebration via its fundraising events across the country, including the annual Philadelphia UNCF Mayor’s Masked Ball set for 7 p.m., Saturday, March 23 at the Pennsylvania Convention Center.

“I am pleased to host the UNCF Mayors’ Masked Ball again this year. Last year, we raised more than $491,000, and this year’s goal is $600,000. This event is important because it supports education for minority students,” said Kenney. “Many sponsors have invested in the work of UNCF to ensure that more students from the Philadelphia Region can receive a college education at an HBCU, like Cheyney and Lincoln Universities, and other colleges and universities in our region like Temple, St. Joseph’s, University of Pennsylvania, Community College of Philadelphia and Drexel. For this, I am very grateful. Investing in the college education of our young people will impact Philadelphia for many generations.”

“The investment in our students and our HBCUs is invaluable,” said Lomax.  “We are bringing key stakeholders together to change the narrative about HBCUs and forge better futures for deserving students and, through them, for all of us.”

Benefiting HBCUs and students of color, events like Philadelphia Mayor’s Masked Ball helped UNCF gain the resources to provide more than $3.4 million in scholarships last year to students from Philadelphia. “For every scholarship UNCF gives a student, there are nine other students we must turn away,” said Gregory Lyles, area development director, UNCF. “UNCF is committed to providing as many students as possible with the necessary tools to improve their lives, and the Philadelphia Mayor’s Masked Ball helps to ensure they go to and through college successfully.”

The economic benefits of HBCUs extend beyond the students they educate and are equally important to the communities they serve. With the release of UNCF’s landmark study, “HBCUs Make America Strong: The Positive Economic Impact of Historically Black Colleges and Universities,” it is now known that Pennsylvania’s two HBCUs annually generate $206 million in total economic impact and 1,660 jobs for the state.

The signature black-tie gala will feature a VIP reception, live and silent auctions and music by DJ Gary O. Follow this event on social media at: @UNCF, #UNCFPhiladelphia, #UNCF, and #UNCF75.