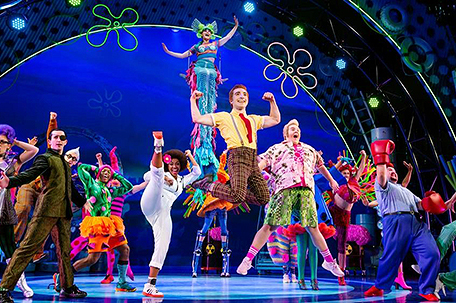 “Who lives in a pineapple under the sea? SpongeBob SquarePants!”

The opening line of the “SpongeBob SquarePants” theme song brings a smile to most faces. The Nickelodeon animated series, “SpongeBob SquarePants” tells the adventures of a yellow sponge SpongeBob, his pet snail  Gary, his starfish best friend Patrick, his squirrel friend Sandy and a host of other characters including Squidworth, Mr. Krabs and Plankton. SpongeBob and his aquatic friends, find themselves in hilarious situations as they navigate life in their home, Bikini Bottom.

In 2017, SpongeBob premiered on Broadway at the Palace Theatre. Since its opening, “The SpongeBob Musical” has earned 12 Tony nominations. Scranton native Lorenzo Pugliese stars as the title character in the shows North American tour, which opened in September of this year. Pugliese spoke with The SUN about playing the beloved character.

When Pugliese was a child, he dreamed of becoming a professional athlete. After a teacher encouraged him to audition for a musical, he realized his calling.

“When I was younger, I was more of a sports kid, but my dad was making me take piano lessons,” he said. “My piano teacher asked me to audition for a youth theater production of High School Musical. I auditioned and got the lead role. When I got on stage for the first time and sang that first song, I knew it was something special.”

Pugliese went on to pursue his passion for performance by attending The University of The Arts (U Arts) in Philadelphia.

“I really liked U Arts and I really liked Philadelphia,” he said. “To be able to go back to the place I just graduated from, where I found myself as an artist, where so many of my friendships and my relationship with my girlfriend blossomed… to do this show there is a dream come true! Philadelphia feels like a second home to me, so this really feels like my homecoming for this tour.”

Not long after graduation, a week to be precise, Pugliese landed the lead role of SpongeBob in the North American tour.

“It feels like I won the lottery! It really is such a gift to be able to bring such an iconic character that brings so much joy to audiences across America.,” he said.

“The SpongeBob Musical much like the television series offers audiences an engaging and entertaining story.

“It takes place in the iconic Bikini Bottom,” Pugliese said. “It’s just a normal day and then it’s announced that this long-standing volcano of doom that’s been lying dormant for many years is set to erupt the following evening. There’s widespread panic and the show follows the different ways that the citizens react to this news. Of course, someone has to try to save the day… I wonder who that could be.”

The SpongeBob Musical also features an incredibly diverse soundtrack written by some of the biggest artists in music such as Sara Bareilles, John Legend, Yolanda Adams and more.

“My favorite song to sing in the show is “I Guess I Miss You” by John Legend. It’s a really beautiful song… a duet between SpongeBob and Patrick. They’re apart and they’re realizing for the first time what it feels like to miss someone. It’s genuine and a really nice change of pace for the show. It’s also the one song in the show where I get to sit down and sing and I’m not running all over the place.”

Although the show brings a lot of joy to its audiences, it also requires a deal of preparation.

“This role is the hardest role I’ve ever had to play,” Pugliese said. “Every day before the show I have to warm up for an hour… physical and vocal. Most of the preparation comes from the incredible work that Tina Landau (director), Chris Gattelli (choreographer) and all of the creative team have done to create this world. The physicality and language of this show really feels like it does the work for you. Once you absorb all of the information, it’s just about trusting that you know it… staying connected with your fellow actors and staying in the present moment.”

Pugliese shared his gratitude in being a part of this show in such a huge capacity.

“Seeing the amount of joy that this show brings people has been a gift. It really affects people of all ages… kids, millennials and older people as well,” he said. “Everyone that comes to see the show leaves with a smile on their face. The effect that this show has on people is super rewarding.”

Be sure to follow Lorenzo Pugliese on Instagram @lorenzo_m_pugliese.  “The SpongeBob Musical” will be at The Forrest Theatre December 3 through December 15. For more information on tickets and showtimes, visit www.kimmelcenter.org.