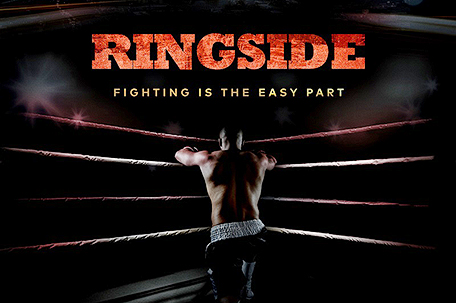 Building on the success of the network’s original film strategy led by hits “Love Under New Management: The Miki Howard Story” and its 2015 American Black Film Festival screenplay competition winner “Bad Dad Rehab,” TV One steps into the sports arena with its latest original film, “Ringside.”

Written, produced and directed by nationally syndicated radio host Russ Parr (“Hear No Evil,” “The Undershepherd,” “35 and Ticking”), “Ringside” stars Tyler Lepley (“The Haves and the Have Nots,” “Baggage Claim”) as undefeated boxer Jaxon Holley, and explores the personal battles he faces outside of the ring while preparing for the biggest fight of his career. “Ringside” premieres on TV One on Sunday, Sept. 4 at 7 p.m. ET with an immediate encore at 9 p.m. ET and an additional airing on Sunday, Sept. 11 at 5 p.m. ET.

Synopsis: Jaxon is a fast-rising star in the tough world of professional boxing whose “street cred” and perceived worthiness to challenge his upcoming opponent – the current champion – are under fire due to his middle class upbringing and advanced education. As he trains for the title fight, the trash-talking, steroid-taking champ Spencer “Timber” Collier, played by Allen Maldonado (“Straight Outta Compton,” “Black-ish”), does everything he can to take Jaxon off his game. The stakes are high and family drama, thirsty groupies, and a manager with a serious gambling problem are all vying for Jaxon’s attention, making it difficult for him to stay focused on the task at hand – winning the belt. In the midst of being pushed to the limit both physically and mentally, Jaxon meets a beautiful photographer Endira (Raney Branch; “The Originals,” “Grey’s Anatomy”) who captures his heart while hiding a devastating secret.

“Ringside is about a boxer, but it’s not a boxing movie, per se,” said director Russ Parr. “We all face battles at different points in life, and that’s what Ringside is about – the battles we have to face even when we don’t feel like fighting.”

“I love portraying complex characters, and Jaxon definitely fits into that category,” said Lepley. “On the surface, he fits the mold of the stereotypical, braggadocio boxer, but that’s simply a persona. In reality, he’s a hardworking, highly educated man who cares about nothing more than providing for his family and friends. Bringing him to life onscreen pushed me as an actor in the best of ways.”

“With Ringside, TV One continues to focus on bringing original film content to our core audience, while also introducing new viewers to all that we have to offer here as a network,” says D’Angela Proctor, SVP of Original Programming and Production for TV One. “We’ve produced 19 original films over the past two years, and are thrilled to add Ringside to that catalogue. This movie is set in the boxing world, but it’s really a film about the complexities of family and the downsides of fame. Tyler and the rest of the cast really created a compelling and engaging story under Russ’s direction, and we can’t wait to share Ringside with our viewers.”

Ringside was written and directed by Russ Parr and produced by Swirl Films. Eric Tomosunas and Keith Neal serve as Executive Producers. Leah Daniel Butler, C.S.A. serves as Casting Director. Lamar Chase serves as Executive in Charge of Production; Donyell McCullough is Sr. Director, Talent & Casting; Robyn Green Arrington is Vice President of Programming and Production and D’Angela Proctor is SVP of Original Programming and Production for TV One.