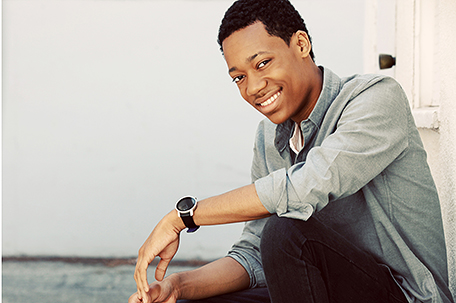 Born in Westchester County, New York on October 9, 1992, Tyler James Williams can be seen this spring co-starring as computer whiz Monty in CBS’ Criminal Minds: Beyond Borders, a new spinoff series. Early last year, he guest-starred as Noah in AMC’s The Walking Dead.

In 2014, he impersonated Steve Urkel on Key & Peele. The skit received rave reviews and was named the #1 sketch of the year by New York Magazine.

On the big screen, Tyler starred as Lionel Higgins in the breakout film Dear White People, a satire about being a black face in a very white place. The picture was well-received, including winning the Special Jury Prize at the 2014 Sundance Film Festival. The year before, he appeared in Peeples opposite Kerry Washington and Craig Robinson.

Tyler might be best known for his work on the Emmy Award-winning series Everybody Hates Chris for which he won a 2007 NAACP Image Award for Best Actor in a Comedy Series. In 2012, he was nominated for another Image Award for his performance a gifted rapper plagued by self-doubt in the Disney Channel Original Movie, Let It Shine.

Tyler began acting at the age of 4 on Sesame Street and he subsequently co-starred in the animated series Little Bill. His other television credits include Law & Order: SVU, as well as numerous appearances in sketches on Saturday Night Live.

An accomplished musician, Tyler recently released a mixtape with his brother Tyrel titled Me, My Brother & a Mic. Here, he talks about starring in RePlay, a scripted time-loop series from New Form Digital which debuted on April 20th. 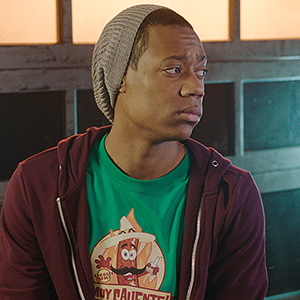 Tyler in a scene from “RePlay”

To see the premiere episode of RePlay, visit: https://www.youtube.com/watch?v=IY6iJrat8K4

Kam Williams: Hi Tyler, thanks for the interview.

TJW: I just really liked the story and I loved the movie Groundhog’s Day.

KW: How would you describe the series in 140 characters or less?

TJW: It’s DJ Allison Lee’s (Lyndsy Fonseca) 25th birthday party and she just HAS to impress promoters. She fails and wishes for another try. She gets 25 chances to get it right.

KW: The premise does sound a little like Groundhog’s Day.

TJW: Yes, I would describe it as a modern day Groundhog’s Day. I really liked RePlay because it wasn’t just Allison’s character that experienced a replay, but eventually her friends realize they are also reliving the same day. And it is interesting to see how humans would act if they knew there were never any consequences for their actions because the next day they could wake up and just redo it.

KW: If you had an opportunity to repeat the most important day of your life until you got it right, would you?

TJW: Oh man, I think I would. I would probably take a really bad date from when I was younger where just everything went wrong.

KW: How would you describe your character?

TJW: I play Nate who is Allison’s best friend, but he is secretly in love with her. He is in the “friends zone,” but really tries to get out of it. Each day, he gets a bit more desperate.

TJW: I love breakfast food any time of the day.

TJW: Well, I remember everything from my days shooting Sesame Street. It was such an incredible experience. My mom also convinced me to steal one of Big Bird’s feathers, which I still have.

TJW: Patience, always be patient. I also believe everything happens for a reason.

TJW: Hmm… How about shooting the RePlay party scene over and over again and doing the wake up scene 25 times on the same day in a row! That was pretty crazy! [Laughs]

TJW: When I am in New York, I love going to a Chinese restaurant and ordering chicken wings and fries.

TJW: I really like where I live in L.A. right now. I live in the Valley and I feel I picked a spot that has some New York aspects. There are diners and a corner store.

TJW: Money and a hair tie for my personal trainer Jimmy. You never know when he needs to put it up in a man bun. [Laughs] I am really into fitness right now and trying to bulk up.

KW: Thanks again for the time, Tyler, and best of luck with all your endeavors.

To see a trailer for RePlay, visit: https://www.youtube.com/watch?v=4gg51v9OVF0