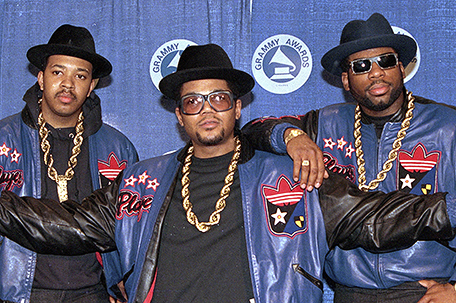 ABOVE PHOTO: The rap group Run-DMC, from left, Joseph “Run” Simmons, Darryl “DMC” McDaniels, and Jason Mizell “Jam Master Jay,” poses at the 31st annual Grammy Awards in New York, on March 2, 1988. Two suspects have been indicted in the 2002 killing of hip hop artist Jam Master Jay, which until now had been one of New York City’s most notorious unsolved killings, according to two law enforcement officials, Monday, Oct. 17, 2020. (AP Photo/Mark Lennihan, File)

NEW YORK  — Nearly two decades after the slaying of Run-DMC star Jam Master Jay, federal prosecutors said Monday they have solved one of New York City’s most enduring mysteries, charging two men from his neighborhood with murder and suggesting that the hip-hop artist — celebrated for his anti-drug stance — was ambushed over a cocaine deal.

The suspects were identified in court papers as Ronald Washington, 56, who is currently serving a federal prison sentence stemming from a string of robberies while on the run from police after Jay’s 2002 death, and Karl Jordan Jr., 36, who is also charged with engaging in a cocaine distribution conspiracy in 2017.

Jay’s death, following the long unsolved slayings of rappers Tupac Shakur in Las Vegas in 1996 and Christopher “Biggie Smalls” Wallace in Los Angeles in 1997, shook the hip-hop world. Chuck D of Public Enemy compared his death to that of John Lennon. More than $60,000 in rewards was offered, but witnesses refused to come forward and the case languished.

“This is a case about a murder that for nearly two decades had gone unanswered,” Acting U.S. Attorney Seth DuCharme said at a news conference announcing the charges. “Today, we begin to answer that question of who killed Jason Mizell, and why, and we’re confident that we can prove those charges beyond a reasonable doubt.”

Washington, who had reportedly been living on a couch at Jay’s home in the days before the killing, was publicly named as a possible suspect or witness as far back as 2007. Prosecutors allege he waved a handgun and ordered another person at the recording studio to lie on the ground while Jordan shot Jay in the head Oct. 30, 2002.

According to prosecutors, Jay would bring in bulk amounts of cocaine to sell retail and was killed as retribution for cutting Washington out of a plan to distribute 10 kilograms in Maryland.

“They walked in and murdered him in cold blood,” DuCharme said.

A message seeking comment was left with a publicist for Run-DMC. The group performed anti-drug concerts, established scholarships and held voter registration drives at its live shows. In Hollis, the Queens neighborhood where he grew up, Jay was seen as a role model. Friends were puzzled by his death, thinking him an unlikely target for violence.

If convicted, Washington and Jordan each face a mandatory minimum sentence of 20 years in prison and a maximum of life in prison, or the death penalty. Prosecutors said in court papers that Attorney General William Barr had not yet decided whether to seek the death penalty.

Jordan pleaded not guilty at an arraigned held Monday by teleconference because of coronavirus-related precautions. His lawyer declined comment. Washington, who is imprisoned in Kentucky, will be arraigned later this week, prosecutors said.

Prosecutors have asked that both be jailed pending trial.

The 37-year-old Jay was shot once in the head with a .40-caliber bullet by a masked assailant at his studio in Hollis. Police identified at least four people in the studio with Jay when he was killed, including the two armed gunmen.

At Jay’s funeral, McDaniels remembered his friend and fellow Run-DMC star as “the embodiment of hip-hop.” He was also a husband and a father of three children.

Prosecutors, though, now say Jay had been bringing cocaine into the New York area since 1996.

At the time, Jay’s acquaintance with Washington — a repeat offender with convictions dating in 1982 — worried and upset his family.

Before ending up on Jay’s couch, Washington served prison time for grand larceny, assault, criminal use of a firearm, heroin possession and other charges. He was been linked to the 1995 fatal shooting of Randy Walker, a close associate of the late Tupac Shakur.

Afterward, prosecutors said, Washington hopped from motel-to-motel and robbed businesses including supermarkets and a Burger King while detectives pursued him in connection with Jay’s killing. He remained at large for nearly three months until police on Long Island nabbed him for robbing a motel.

Last month, as prosecutors were preparing to seek a grand jury indictment against him for Jay’s death, Washington filed a handwritten petition asking to immediately be released to home confinement, arguing his medical history put him at risk for complications from coronavirus. Federal prosecutors responded by asking for more time to respond, delaying any decision until after Washington was charged.

Jordan, just a teenager when Jay was killed, was declared a juvenile delinquent after a 1999 robbery arrest and had a firearm case dismissed when the complaining witness refused to cooperate with law enforcement. In recent years, prosecutors said, he’s been caught on audio and video surveillance six times selling cocaine to an undercover federal agent.