Two HBCU alumni, Will Packer and Philly native Chris Gees, follow their dreams all the way to Hollywood 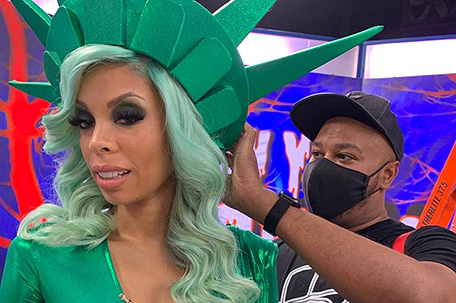 ABOVE PHOTO: Chris Gees touches up Ciera Payton as Wendy Williams on set.

LOS ANGELES – Ever since the election of Vice President Kamala Harris, a graduate of Howard University, the spotlight has been shining bright on the accomplishments of graduates from historically Black colleges and universities (HBCU).

From the boardroom to the White House, HBCU alumni are making a significant impact in the world, including on the big screen. From Tallahassee, Florida all the way to Hollywood, Florida A&M alumni Will Packer and Chris Gees have followed their dreams against all odds.

Last week, another dream for them became reality and “Wendy Williams: The Movie,” produced by Packer, debuted worldwide on Lifetime on Saturday, January 30.

In addition to Rattler Will Packer, who’s best known for such films like “Think Like a Man Too,” “Straight Outta Compton,” “Girls Trip,” “Night School,” “Little,” “The Photograph,” another Rattler, Chris Griffin, is also front and center as the glam department head, head of department for hair, and an on-camera role in “Wendy Williams: The Movie.”

Known professionally as Chris Gees, Griffin graduated from Florida A&M University (FAMU) in the spring of 2004 with his second bachelor of science degree in music and theatre. While attending FAMU, Gees was active in the FAMU Concert Choir, the FAMU Gospel Choir, the FAMU Connection, and Phi Mu Alpha Fraternity.

It was also at FAMU where Gees’ passion for hair and make-up blossomed as he worked with several groups and organizations on campus providing hair and makeup services, while simultaneously honing his entrepreneur skills running a full barbershop out of his dorm rooms in Gibbs Hall and Phase II.

The Wendy Williams biopic was both a meaningful project and full-circle moment for Gees, because  “The Wendy Williams  Show” is where he received his big break in recognition of his work as a celebrity stylist.

During the pilot season, Gees appeared on the show as an audience member, as he was there with his client, Omarosa, who was a guest on the show. During the taping, there was an altercation between Omarosa and Wendy Williams and the clips of this episode went viral, thus spotlighting Omarosa’s new more polished look. That moment solidified Gees as a rising celebrity stylist and his career took off from there.

“With more than 10 years’ experience as a celebrity stylist and more than 20 years in the industry as a whole, this was a wonderful way to open the door to take my career to the next level,” Gees said. “On the set of “Wendy Williams: The Movie” was the first time I’ve had the pleasure of working with fellow Rattler and famed movie producer, Will Packer. It reminded me of the work-ethic and education that was instilled in us by the entire community of staff and students at FAMU. Against all odds, we’ve continued to work hard to achieve our dreams and make our fellow FAMU Rattlers proud.”

In addition to his role leading the glam team behind the scenes and his appearance on-screen, Gees was also able to highlight his hair care system, CannaCare by Chris Gees, which he used as part of the styling and grooming services provided to the actors and actresses on set, including Ciera Payton, who played the lead character, Wendy Williams.

“Chris Gees brought something so special to the set of “Wendy Williams: The Movie,” Payton said. “Every day he brought so much light and it was truly a joy to be in his chair throughout filming. He’s beyond gifted and I’ll so cherish working with Chris. FAMU should be immensely proud of Chris Gees, for he well represents his alma mater and his profession with the highest esteem.”

Known for styling the tresses of many of Hollywood’s elite, including Beyoncé, Tori Spelling, Stevie Wonder, Wendy Raquel Robinson, and David Tutera, to name a few, Gees has made a name for himself by providing top quality hair designs and hair care for his clients. He was inspired to develop CannaCare by Chris Gees to address the concerns at the forefront for many of the superstars and professional women alike that he works with.

A native of Philadelphia, Gees is a veteran hair and makeup artist, on-air media personality and accomplished vocalist. Highly regarded as one of the best in his respective fields, he has been selected leads in the hair and make-up departments of some of the most notable events in the United States.

Most recently, Gees served as head of department for “Merry Liddle Christmas Wedding,”a holiday film starring Kelly Rowland, and working on Tommy Hilfiger and Zendaya’s team for the Paris Fashion Week Runway Show, a show that was the first of its kind with an all-Black cast of models and GLAM department heads.  Gees also worked on Disney’s “A Wrinkle in Time,” directed by Ava Duvernay and starring Oprah Winfrey and Beyonce’s “Homecoming” and “Lemonade” as key hairstylist.

Preparing your hair for the spring season? It begins with a healthy scalp