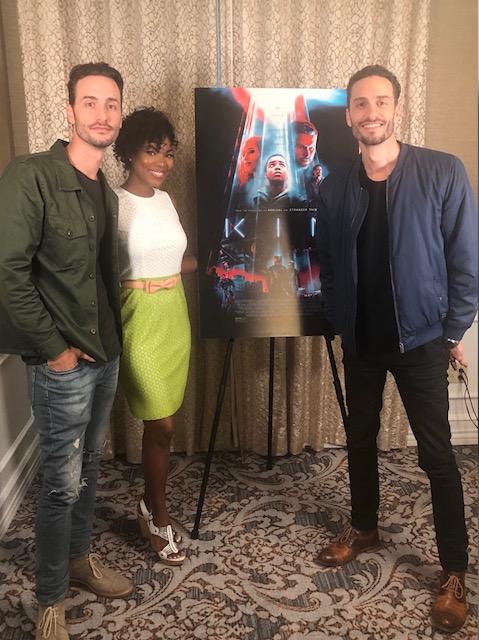 The word “kin” is defined as family or relatives. The interesting thing about life is that the longer we live, the more we understand that some family we choose, and some family chooses us. Australian born twin brothers Josh and Jonathan Baker make their feature film directorial debut with their upcoming film “KIN”. “KIN”—which is based on the 2014 short film “Big Man”— is a story about a young African-American boy who finds an alien weapon in an 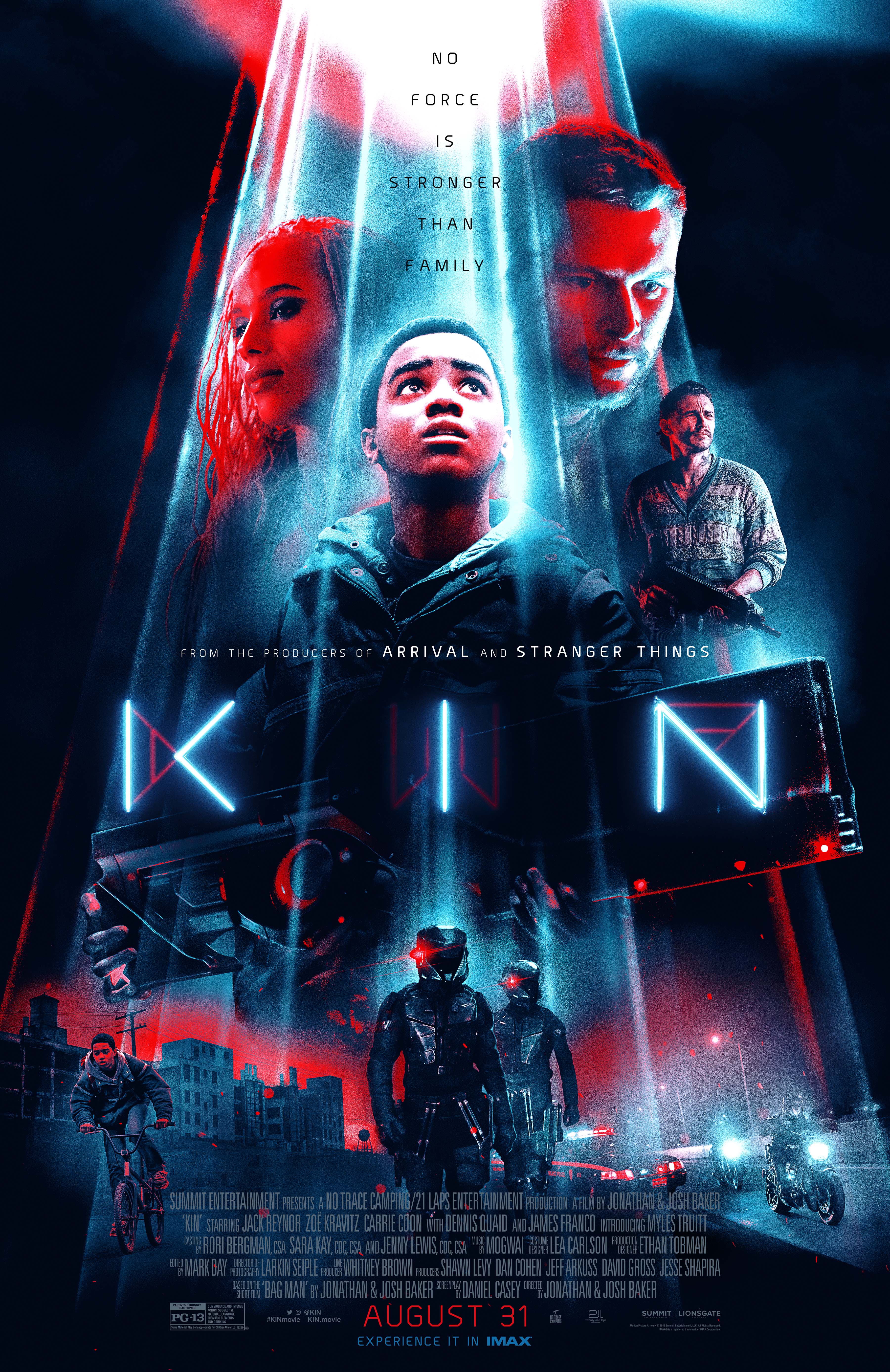 abandoned building. His discovery of the weapon and reconnection with his brother who recently was released from prison, leads audiences on an action-packed ride, which arrives at the destination of self-discovery. “KIN” has an all star cast including; newcomer Myles Truitt (Eli), Jack Reynor (Jimmy), Zoë Kravitz (Milly), Dennis Quaid (Hal), and James Franco (Taylor). “KIN” is culmination of ’80s nostalgia, the allure of childhood, loss, adventure and the importance of family. Josh and Jonathan Baker sat down with the SUN to speak about their journey to creating this one of a kind film.

The film “KIN” has a number of elements working thoroughly the storyline simultaneously.

“What we love about this movie is that it’s multiple things,” Josh Baker said. “I would say it’s about an African-American boy that is adopted into a Polish American family in Detroit. It’s about his brother coming out of prison and then really finding a relationship they’ve never had before. He stumbles upon an alien device… Technology, a weapon that is not from my world and it gets kind of mixed up and some criminal enterprises in a family dynamic as they go on the run. What we love is that it is many different type of things and it’s our tasting cinema kind of all combined”.

“So there is intimate character-based references, all the way to giant sci-fi ideas,” Jonathan Baker added. “I think from our side (we thought) why can’t we have all that in the one movie?’

We grew up through the ’80s, and I think there were a lot of big movies that really influenced the way we look at cinema. Movies like “E.T.” had a massive influence. I’m not going to say I cried… I cried , he said with a laugh. “That’s kind of where we learned what our version of storytelling was. This film has a lot of that ’80s wish fulfillment in it. Then it has a lot of other influences things like crime drama and the more gritty character driven, more indie feeling movies. As we got older, and our tastes sort of opened up, I think a lot of those influences are put in “KIN”.”

The beauty of the film “KIN” is that the characters are multifaceted, and throughout the storyline those layers are gradually revealed.

“We’ve described it as they’re all broken characters that are better together,” Josh said. “You’ve got these two brothers Jimmy and Eli that really don’t know each other. They don’t have much of a relationship even though they’ve been in the same family for a while. One has been inside, and he just got out after a stint in jail for like six or seven years. You’re kind of restarting your relationship and figuring out who you are.”

“ I think what else was important, was a diverse group of characters especially in that sort of dynamic on the road,” Jonathan added. “Zoë Kravitz, Jack Reynor, and Myles Truitt are all very different from each other in every way. Whether it’s experience or trauma or love, they’re finding themselves and finding that family unit.”

In addition to showing a different kind of family unit and dynamic, “KIN” successfully shows a young Black kid, being viewed and handled as a young Black kid, not an adult or a criminal, even when he makes poor choices. Newcomer Myles Truitt gives a brilliant performance. Josh and Jonathan shared their thoughts on Eli’s character.

“He’s not perfect in any way, but we start him in a place where he’s having some issues at school, he’s lost his mother, he is having this sort of resentful feedback from his father about his brother coming out of prison,so he’s in a very weird turbulent place in his life,” Jonathan said. “He’s never truly felt a sense of belonging, so that’s where the character is really starting. Then we take him on a hero’s journey really where he evolves greatly.”

“It’s about an outsider figuring out his belonging and where he belongs in the world,” Josh added.

Everything in the film comes full circle with the fact that Josh and Jonathan are their own family unit who worked together to create this film. They opened up about what it’s like being a directing team.

“Working together as co-directors, obviously twin brothers — we’ve known each other 39 years now —we met in the womb,” Jonathan said.  “So, it’s great to have a partner that has the same sort of taste as you, the same experiences as you, and you really create something together… it’s a 50/50 thing. Having your bro there that can have your back in those tense meetings, or take on some of the pressures that is making a Hollywood movie… it’s a good way of working,” “KIN” offers action, character development, and more than a few moments that tug at the heart. “KIN”  also offers audiences a fair share of advanced technology.

“We’re setting up a small story about these intimate character relationships, but at the end of the day, we’re also throwing this technology science fiction base over the whole thing,” Josh said. “You’ve got to have cool scenes with some cool tech.The gun almost plays this character in the film itself in… Where does it come from? And you’ve got all these guys coming back to try to get their weapon and that involves a whole bunch of science fiction that you get to play with which was really fun.”

“I think we’ve got some really unique visuals in there that’s not just the same mashup tone of the movie,” Jonathan added. “Even in science fiction, there’s a lot of things that we haven’t seen before. It was really exciting to create a relationship between Eli in this device that is similar to Frodo in “The Lord of the Rings” sort of. Eli doesn’t know whether it’s taking him down a bad path or not… he’s kind of working it all out and I don’t think that it is all-good. I think a lot of the bad decisions that Eli makes in this film are because of this weapon and ultimately he has to decide,‘Am I going to hold onto this thing or am I going to give it up?’”

The only thing left to do is check out this incredible film for yourselves! “KIN” opens in theaters and IMAX nationwide on Friday, August 31st. Check your local listings for showtimes. Be sure to follow Josh and Jonathan Baker on social media @redbikebluebike to keep up with all things “KIN” as well as their upcoming projects.

Sam Pollard is directing a film on the life of the first African American mayor of Atlanta – Maynard Holbrook Jackson, Jr.