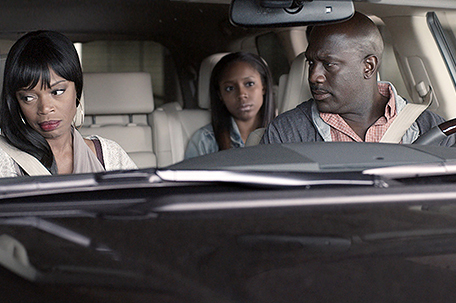 ABOVE PHOTO:  Jill Marie Jones, Jahnee Wallace and Richard T. Jones in a scene from Hear No Evil.

SILVER SPRING, MD– TVOne will present the network premiere of the edge-of-your seat thriller Hear No Evil on Saturday, March 14th at 8PM/ET.

When a freak accident jolts Shelby Carson (Jahnee Wallace) — a 15-year-old hearing impaired student — from her peaceful world of silence and seclusion into the world of the hearing, she begins to hear messages from God and discovers that more than just her hearing was restored in the accident. Filled with chaos and confusion, Shelby struggles to cope with her newfound circumstances and battles with what she should do with the knowledge of startling realities — including compromised health and well-being — facing the people around her.

What initially seems to be a blessing on the surface could very well be a curse that unravels the bond between her dearest loved ones. Relationships are tested and secrets are revealed in this compelling story of family, faith and the resolve of a young girl.

Hear No Evil stars Jill Marie Jones (Girlfriends) as Kate, Richard T. Jones (Why Did I Get Married?) as Samuel and Jackie Long (ATL) as Jason.