TV One premieres Jean of the Joneses on Oct. 23 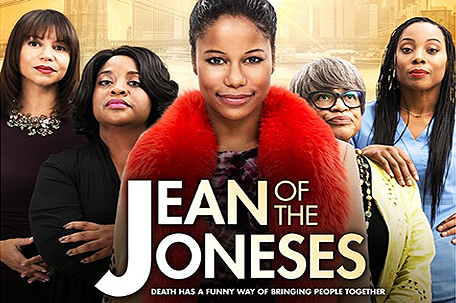 SILVER SPRING, MD.–TV One announced today the television premiere of “Jean of the Joneses,” a critically acclaimed comedy-drama, is set for Sunday, October 23 at 7 p.m. ET (encore at 9 p.m. ET). The network’s latest original movie centers on 25-year-old Jean, portrayed in a break-out performance by Taylour Paige (Hit The Floor), and her multi-generational, middle-class family of strong-minded, yet loving women. In the wake of tragedy, this matriarchal clan uncovers secrets that will ultimately teach their family a powerful lesson of acceptance.

Paige is joined by co-stars Michelle Hurst (“Orange is The New Black”) as Daphne, the matriarch whose secrets lead the ladies down a path of dysfunction. Jean’s aunts further complicate the family dynamics as Anne, the “baby” of the Jones sisters, played by Erica Ash (“Survivor’s Remorse”) is unable to take responsibility for her decisions. Janet, played by Gloria Reuben (“Lincoln,” “ER”), finds herself in the midst of a bitter separation and projects negativity onto anyone in her path.

Sherri Shepherd (“Trial & Error,” “The View,” “The Soul Man”) also appears in the dramatic role of Jean’s rigid mother Maureen, who, by holding on to the pain of her past, is unable to forge the relationship her daughter yearns to have. “It was pure joy working with Stella,” remarked Shepherd. “Her brilliance shines through every word on the page.”

“Jean of the Joneses” explores the multifaceted family issues that are both relatable and offer teachable lessons. Tensions rise, and old conflicts come to a boil when Jean uncovers various buried family secrets, while throughout the film, the Jones women face their divorces, infidelities, and past transgressions. In particular, Jean faces the tough truths of her career and crippling ability to move on from a past relationship to the love staring her right in the face. Inspired by her own life experiences, the semi-autobiographical screenplay was the first script penned by writer-director Stella Meghie.

“Jean of the Joneses is an original film like none other seen on our network,” said Brad Siegel, TV One’s President. “As we continue to raise the bar with our original movies, we are motivated to continue presenting opportunities for increased visibility to new talent – like Stella Meghie – whose powerful film demonstrates our commitment to support and nurture brilliant storytellers at all stages in their career.”