TV One to premiere the original film, Behind The Movement, Feb. 11 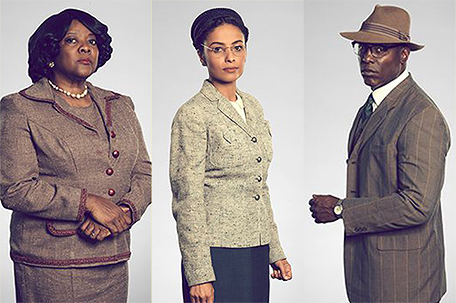 ABOVE PHOTO:  From left: Loretta Divine, as Jo Ann Robinson; Meta Golding, as Rosa Parks and Isaiah Washington as E.D. Nixon in TV One’s “Behind The Movement”.

The story behind the rise of the Montgomery Bus Boycott

SILVER SPRING, MD–Rosa Parks’ refusal to give up her bus seat 62 years ago was only the beginning. Premiering on TV One in February 11, “Behind the Movement” offers a closer look at how the history-making Montgomery Bus Boycott was planned in just three days and ultimately led to the Civil Rights Movement of the 1950s and 1960s. A new trailer provides a glimpse into Mrs. Parks’ thoughts as she sat on the bus that December evening.

“It was reported that I was tired and that wasn’t true,” states Meta Golding as Rosa Parks in the trailer. “I was tired of all the injustice, all the fear and indignity that they were putting us through. That’s the truth.”

Starring Golding (“The Hunger Games”) as Rosa Parks, Isaiah Washington (“The 100”) as E.D. Nixon, Loretta Devine (“Waiting to Exhale”) as Jo Ann Robinson, Roger Guenveur Smith (“American Gangster”) as Raymond Parks and Shaun Clay as Dr. Martin Luther King, Jr., “Behind the Movement” reveals the  untold story of how a group of everyday people decided this incident was the right time to  take  a stand for  their civil rights and demand equal treatment.

Premiering during Black History Month, this original made-for-television movie honors the contributions of many unsung heroes of this watershed moment in the Civil Rights struggle. The film recounts the inner workings and behind the scenes preparation that took place during three intense days between the  fateful evening when Parks refused  to give up her seat through the launch of this significant  protest. While  Dr. Martin Luther King Jr. was a prominent leader of the Montgomery Bus Boycott, there was a chorus of lesser-known heroes, including Rosa Parks, who galvanized the most successful boycott of its time.

TV One viewers can also join the conversation by connecting via social media on Twitter, lnstagram and Facebook (@tvonetv) using the hash tags #BEHINDTHEMOVEMENT and #REPRESENT.