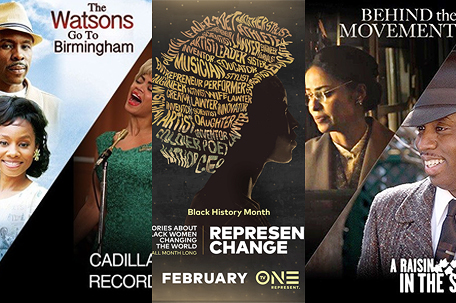 SILVER SPRING, MD–TV One celebrates Black History Month with a tribute to inspirational Black women and a full schedule of programs that exemplifies this year’s theme, “Represent Change.”

The network is set to premiere a short form video campaign featuring influential Black women who are impacting change in our nation, and their communities and families.

The campaign will feature 30-second on-air interstitials that highlight the women speaking on the impact of action and change. Across its digital and social platforms, TV One will feature in-depth profiles documenting their start, their struggle and ultimately, how they became champions of change. Both elements of the campaign will run throughout February.

“This is a pivotal time for women of color in our nation and we’re proud to amplify the voices of women who are influencing change in our society as part of our Black History Month programming,” said General Manager Michelle Rice. “TV One will also feature programs highlighting the rich stories of women behind the Civil Rights Movement and other heroes who changed the course of American history.”

While the network focuses all year long on all facets of Black life and culture, Black History Month on TV One is a special time to honor the tremendous contributions that African-Americans have made throughout the world.  Every Wednesday, beginning Wednesday, February 6 at 9 p.m. ET, the network will air movies that celebrate women at the forefront of important moments in history, including the TV One original film “Behind The Movement”, “A Raisin In The Sun”, “Cadillac Records”, and “The Watsons Go To Birmingham”. Additionally, TV One will present weekly themed episodes of its signature series “Unsung Hollywood”  featuring female artists who’ve inspired change that will lead into the feature movie presentations. Featured actresses will include celebrated performers Vanessa Bell Calloway, Pam Grier, Eartha Kitt and Sheryl Lee Ralph. “Unsung Hollywood” profiles some of the most talented, versatile, and influential Black celebrities in Hollywood, from movies and television to comedy, sports, and more.

Rounding out the network’s Black History Month line-up is a three-day marathon of the classic sitcom “Good Times” in honor of the show’s 45th anniversary on February 8. The “Good Times” marathon begins on Friday, February 8 at 10 a.m. ET and airs through Sunday, February 10 until 4:30 a.m. ET.

Eight time NAACP Award nominee Vanessa Bell Calloway burst on the scene in “All My Children” and in 1988 she received rave reviews as Eddie Murphy’s arranged bride in “Coming to America.” Since then she’s been featured in films like “What’s Love Got To Do With It,” “Biker Boys,” “The Inkwell,” TV One’s Original Movie “To Hell and Back” and the popular series “Saints & Sinners.” In this episode Vanessa gets real about her personal life, her career and the obstacles she has faced as an African American actress in Hollywood.

Set during the tumultuous Civil Rights era, TV One’s original film offers a closer look at how Rosa Parks’ refusal to give up her seat on a bus to a white passenger launched the historical Montgomery Bus Boycott. The movie recounts the inner workings and behind the scenes preparation that took place during the three intense days between the fateful evening when Parks refused to give up her seat, to the launch of this significant protest. Starring Meta Golding, Isaiah Washington, Roger Guenveur Smith and Loretta Devine.

Pam Grier rose to stardom in the early 1970s as a trailblazing black female action star whose unparalleled beauty and fighting skills changed the face of women in film. Pam Grier goes behind the stardom and provides an intimate look at her most iconic roles and her astounding life.

A RAISIN IN THE SUN

Based on the award-winning play by Lorraine Hansberry, the 2008 adaptation stars Sean Combs, Audra McDonald, Phylicia Rashad and Sanaa Lathan, and tells the story of a family living and struggling on Chicago’s South Side in the 1950s. A fiercely moving portrait of people whose hopes and dreams are constantly deferred, “A Raisin In the Sun” was the first play written by an African-American woman to be produced on Broadway.

From Broadway to the big screen, renowned international dancer/actress/singer/activist Eartha Kitt shattered barriers on and off camera.  Known for her highly distinctive singing style and unforgettable roles like “Catwoman,” Eartha was also a vocal critic of the Vietnam War and an advocate for social justice issues. Through exclusive footage and revelations from family and friends, audiences will get a glimpse of the trials and triumphs she faced privately and publicly.

Written and directed by Darnell Martin, this biographical drama explores the musical era from the early 1940s to the late 1960s and chronicles the turbulent lives of some of America’s musical legends, including Etta James, Muddy Waters and Chuck Berry. The film stars Beyoncé, Cedric the Entertainer, Jeffrey Wright and Mos Def.

THE WATSONS GO TO BIRMINGHAM

Set against the backdrop of the Civil Rights Movement in 1963, this film follows a tight-knit African-American family living in Flint, MI.  When the eldest son begins to get into trouble, the parents decide to send him to Alabama under the guidance of his grandmother. The entire family travels there together by car and during their visit, they find themselves involved in life-changing events. Featured cast members include Wood Harris, Anika Noni Rose, Skai Jackson and David Alan Grier.