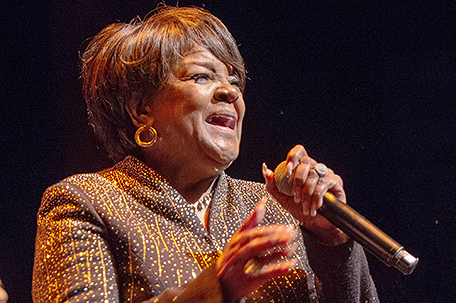 SILVER SPRING, MD – TV One continues to comfort and entertain viewers during this unprecedented time with a special Easter lineup of faith-based programming on Saturday, April 11 and Sunday, April 12. The jubilant weekend slate includes original films, Sinners Wanted,” “Hear No Evil,” “For the Love of Ruth,” , and the re-airing of “Unsung” episodes featuring some of the brightest stars in gospel music including Shirley Caesar, Marvin Sapp, Tasha Cobbs-Leonard, and the group that launched the “Unsung” series — The Clark Sisters.

Leo Shepherd is a young vibrant minister from Macon, Georgia, who becomes pastor of Grace Community Church. On his first day, Leo meets a prostitute named Ginger “Gigi” Clementine.They begin to grow closer and their feelings become stronger. The church finds out about the budding relationship and immediately voice concerns about the impact of the woman’s past on the church’s image. Despite the congregation’s outcry, Leo continues to pursue Gigi and falls deeply in love, eventually asking for her hand in marriage. Their holy union, however, reveals both Leo and Gigi’s pasts and puts their future in jeopardy.

A freak accident jolts Shelby Carson — a 15-year-old hearing impaired student — from her peaceful world of silence and seclusion into the world of the hearing. Filled with chaos, confusion and imminent danger, Shelby struggles to cope with her newfound circumstances. She battles with the unfortunate realities facing the people around her, including complete strangers and her dearest loved ones. What initially seems to be a blessing on the surface could very well be a curse that will rock her family to the core. Relationships are tested and secrets revealed in this compelling story of family, faith and the resolve of a young girl.

FOR THE LOVE OF RUTH

Ruth Sommerling has lived a life filled with pain and disappointment. After Ruth becomes widowed, she refused to abandon the family ties she’s formed with the Marachond family, particularly Naomi Marachond. As the matriarch of the family, Naomi introduces Ruth to the fullness that a life filled with faith and loyalty presents. The love she desired all her life is found in Naomi’s reclusive cousin, Braxton. Though this bond is met with opposition, he never wavers from showering Ruth with an outpouring of love and kindness.

With over 40 albums and 11 Grammy Awards, Shirley Caesar is the reigning “Queen of Gospel Music.” Despite her success, Caesar always knew her life was meant for more than music, and in the late 80s, she’d taken on a second career as a pastor, preaching around the world and starting her own church in Raleigh, North Carolina. With a career now spanning over seven decades, Shirley Caesar has become a living legend of gospel music, and shares the triumphs and challenges of a life dedicated to spreading the Good News.

With one of the most unique voices in gospel music, Marvin Sapp mixed old-school sensibilities and new school swagger, leading him to dominate the gospel charts in the 2000s with seven Top 10 hits including “The Best in Me” and his platinum-selling, chart-topping hit “Never Would’ve Made It.” But Sapp’s faith would be tested on several occasions – from illness, to personal attacks, to the tragic death of his wife MaLinda to colon cancer. In this episode of “Unsung”, one of the biggest names in gospel music, along with friends like Kirk Franklin, share his testimony.

Gospel phenom Tasha Cobbs-Leonard’s hybrid sound of R&B and hip-hop infused gospel brought her crossover success and allowed her to reach beyond traditional contemporary Christian audiences, earning her the nickname “The Worship Bridge.” Despite breathing new life into the genre, her collaborations with secular artists and her inclusive ministry earned her criticism and backlash from within her religious community. Her message of deliverance and hope – inspired by her own struggles with depression – continues to uplift millions.

In the 2008 series premiere episode of  “Unsung,” viewers learned the untold story of the legendary group, The Clark Sisters. These second generation gospel stars broke down gospel/secular barriers for artists such as The Winans and Kirk Franklin, but their own personal demons, struggles within the family and backlash from the most traditional in the church community, kept them from becoming the crossover gospel household names they were destined to become.