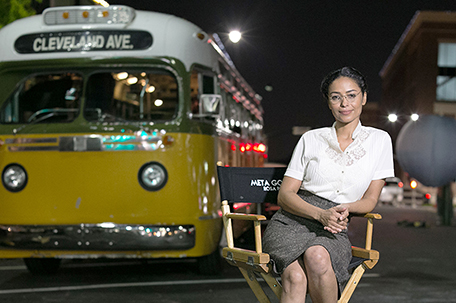 ABOVE PHOTO:  Meta Golding as Rosa Parks on the set of the TV One original film “Behind the Movement.”

SILVER SPRING, MD — TV One announced that production is underway in Atlanta for the new film, “Behind the Movement,” starring Meta Golding (“The Hunger Games”), Isaiah Washington (“The 100”), Loretta Devine (“Waiting to Exhale”), and Roger Guenveur Smith (“American Gangster”). The film is slated to premiere in time for Black History Month 2018.

“Behind the Movement” is a unique and fast-paced retelling of how Rosa Parks’ refusal to give up her seat launched the history-making Montgomery Bus Boycott. The film will reveal the untold story of how a group of everyday people decided this incident was the right time to take a stand for their civil rights and demand equal treatment.

Behind the Movement cast announced today:

Rosa’s day as a seamstress at the Montgomery Fair Department Store, in Alabama in 1955, starts as any other, but her journey home was interrupted when the evening bus driver tells the Black passengers in the first row of the “Negro Section” to make room for White passengers who were without seats. Though this was common practice, that evening, Parks decides not to comply. Knowing her rights and being fed up with the treatment of Black citizens, she accepts the consequences of refusing to obey an order and is arrested. That night, E.D. Nixon, president of the local chapter of the NAACP, of which Rosa is the secretary, calls his friend Clifford Durr, a local White attorney. Once safely at home, E.D. tells Rosa that she is the perfect “test case” for a bus boycott, an idea that had been in discussion since the bus segregation rules were continuously being abused and more and more Blacks were being removed or threatened if they didn’t give up their seats to White riders.

Afraid for her safety, Rosa’s mother and her husband try to talk her out of leading the boycott, but Rosa tells them that taking this stance is too important. By midnight, plans are put in motion to launch a boycott that, ultimately, would last more than a year and give rise to what is known today at the Civil Rights Movement.

For more information about TV One’s upcoming programming, including original movies, visit the network’s companion website at www.tvone.tv. TV One viewers can also join the conversation by connecting via social media on Twitter, Instagram  and Facebook (@tvonetv)using the hash tags #BEHINDTHEMOVEMENT and #REPRESENT.

60 years after boycott, using Montgomery bus can be trying