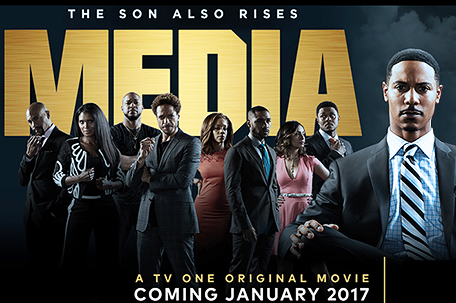 TV One has announced a new original movie titled “Media,” which will explore the drama and secrets behind a powerful family dynasty.

The executive producing team of Cathy Hughes and her production partner Susan Banks conceived and produced the project.

Directed by Craig Ross, Jr., “Media” is described as a riveting story of a wealthy family battling the competitive challenges of keeping their status and position in the communications industry. Passion, intrigue and murder become a lethal recipe for powerful matriarch Jackie Jones and her children. Portrayed by Penny Johnson Jerald, Jackie is the founder of Jones Universal Media Properties, known as JUMP, the world’s premier urban media conglomerate. A family tragedy forces her son, prominent lead city attorney and prosecutor Michael Jones, played by Brian White, to abandon his political aspirations and take over the company, just as a ruthless rival challenges JUMP’s longtime domination of a lucrative industry. Michael is confronted by sins of the past, and the dangers of the present when Jabbar Randolph (played by Gary Dourdan), CEO of JUMP’s biggest competitor, is released from prison. Grabbing back the reigns from his brother, Will, played by Stephen Bishop, Jabbar embarks on a mission of revenge, betrayal and corporate intrigue.

The Jones family is rounded out by the eldest son, Clay Jones portrayed by Pooch Hall as the mercurial head of the family business; Chrystee Pharris as the only daughter, Crystal Jones, JUMP’s CFO; and hard-partying youngest brother Anthony Jones portrayed by Blue Kimble.

“This storyline has been in the works for over six years and I am thrilled to finally bring it to our audience,” said executive producer Cathy Hughes. “My entire life has been dedicated to creating media outlets to entertain and inspire our community. We know our audience loves drama and that’s what MEDIA is all about.”

“’Media’ captures the power struggles, secrets and stakes surrounding a family-owned business,” added TV One President Brad Siegel. “The outstanding cast and production team delivered on a truly excellent script. We are ecstatic with how it turned out and confident viewers will be riveted from the first minute of the movie to the end titles.”

“Media” is executive produced by Radio One Founder and Chairperson Cathy Hughes and her production partner Susan Banks, Kevin Arkadie (who also served as writer), Sheila Ducksworth and was produced for TV One by Ducksworth Productions.

“Media” was filmed on location in Atlanta, Georgia.

The drama is the latest addition to the network’s impressive slate of original films and is set to premiere in early 2017.

CeCe Winans, Marvin Sapp and Donald Lawrence join Cathy Hughes for a special gospel edition of TV One on One, Sept. 11

US premiere of Welsh playwright Abi Morgan’s hit play, “Tiny Dynamite” to be produced at the 2010 Fringe Festival