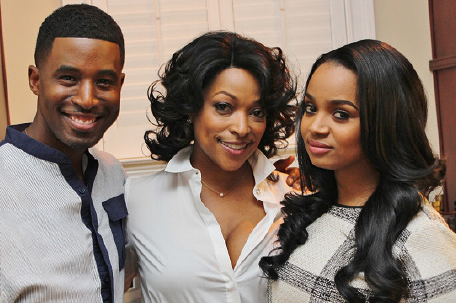 ABOVE PHOTO: Gavin Houston, Kellita Smith and Kyla Pratt in ‘The Secret She Kept.’

TV One  is shedding light on mental health in the Black community during National Minority Mental Health Awareness Month with the premiere of its original movie, The Secret She Kept, this Sunday, July 10 at 7 p.m. ET (encore at 9 p.m. ET). Inspired by the best-selling novel of the same name by NAACP Image Award-winning author ReShonda Tate Billingsley, TV One’s original feature film, “The Secret She Kept,” immerses viewers in the story of a prominent family that lets shame, confusion and misunderstandings about mental illness send them down a tragic path.

Kyla Pratt (‘Recovery Road’, ‘One on One’, ‘The Proud Family’, Dr. Doolittle) stars as beautiful, high-powered attorney Tia Jiles, who has just married the man of her dreams, successful magazine executive Lance Kingston (Gavin Houston, “The Haves and the Have Nots,” “Guiding Light”), and is on the brink of launching a major political campaign when a pattern of erratic behavior uncovers her secret: she suffers from mental illness.

“So often, we trivialize that someone is just ‘crazy’ and we don’t recognize that mental illness is real and relevant. I wanted to show not only was this something that deserved our attention, but that we shouldn’t be ashamed to seek help. If our bodies are sick, we get help. I wanted to de-stigmatize the shame that often keeps us from seeking treatment when our minds are sick,” said Billingsley. “I am grateful “The Secret She Kept” has been turned into a movie. While the book did exceptionally well, the platform TV One provides will hopefully get more people talking about what so many people see as a dirty little secret.”

“The Secret She Kept” is an exploration of the impact of mental illness on families, which is far too often closeted in the African-American community and provides a thought-provoking and inspirational story which addresses how far to go to save a loved one when they’ve kept a dangerous secret for years. It’s a question facing Lance (Houston) whose recent marriage to Tia (Pratt) seemed to promise a bright future for both of them. But under the surface, a fierce and frightening storm was brewing. That’s because Tia never revealed to Lance what she and her family, especially her mother Virginia Scroggins Jiles played by Kellita Smith (“Z Nation,” “The Bernie Mac Show,” “The First Family”), have known since Tia was seventeen: she has an illness that takes over her mind, transforming her into a woman struggling with bi-polar and schizoaffective disorder both privately and publicly. Determined to end the cycle of secrecy, Lance, along with his sister Beverly Kingston (Vanessa A. Williams, “Soul Food,” “Melrose Place”), set out to convince Tia to resume her medication and enter treatment.

The Bebe Moore Campbell National Minority Mental Health Awareness Month (July) was announced in May 2008 by the U.S. House of Representatives to enhance public awareness of mental illness and mental illness among minorities. The resolution was sponsored by Rep. Albert Wynn (D-MD) and cosponsored by a large bipartisan group, to also improve access to mental health treatment and services, and promote public awareness of mental illness.  More information is available on the National Alliance of Mental Illness website.

To learn more about The Secret She Kept author ReShonda Tate Billingsley, visit www.reshondatatebillingsley.com/, Facebook, Twitter,  (@ReShondaT) and Instagram (@ReshondaTateBillingsley). In addition, viewers are encouraged to participate in a nationwide Twitter Party with Billingsley during the movie’s premiere on Sunday, July 10, 7-9 p.m. ET using the hashtag #SecretSheKept.

For more information about TV One’s “The Secret She Kept,” visit the network’s companion website at www.tvone.tv. TV One viewers can also join the conversation by connecting via social media on Twitter, Instagram and Facebook (@tvonetv) using the hashtag #SecretSheKept and catch clips and promos on TV One’s YouTube Channel.