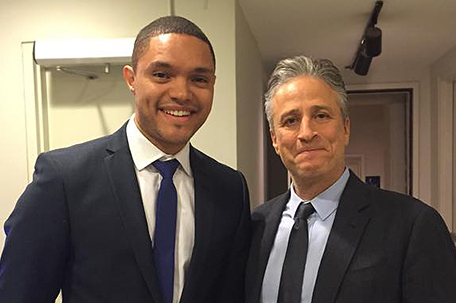 NEW YORK — Trevor Noah, a 31-year-old comedian from South Africa who has contributed to “The Daily Show” a handful of times in recent months, will become Jon Stewart’s replacement as host, Comedy Central announced Monday.

Noah was chosen a little more than a month after Stewart unexpectedly announced he was leaving “The Daily Show” following 16 years as the show’s principal voice.

The New Jersey-born Stewart is being replaced by the son of a black South African mother and white European father. Noah has an international presence, and hosted a late-night talk show in South Africa, “Tonight With Trevor Noah.”

Noah, who has appeared on Jay Leno and David Letterman, was the subject of a 2011 documentary film by David Paul Meyer, “You Laugh but It’s True,” which followed his career in post-apartheid South Africa.

He will join Larry Wilmore, a writer-comedian who replaced Stephen Colbert in January in the half-hour slot following “The Daily Show.” When Noah takes over, Comedy Central will have completely remade the one-hour comedy block that gave the network critical acclaim and, arguably, its identity.

In an interview, Noah likened himself to Stewart, his soon-to-be-predecessor, as a fellow progressive.

“Obviously where you’re from may inform a lot of your decisions. But traveling the world I learned that progressives, regardless of their locations, think in a global space,” he said by phone from Dubai, where he is on a comedy tour.

“Although I’m a guy who happens to be not from the same place that Jon’s from,” he added, “I’ve lived in America for years before I went back out on the road and I’ve learned to love the place.”

He dismissed the notion that he’ll be “taking over” the program.

“I’m joining the team,” he said. “I get to be a part of that as the host and a face, sharing that space with my fellow correspondents.”

Noah made his debut on “The Daily Show” last December with a segment that poked fun at cliched American images of his native Africa. With a reference to the “hands up” gesture that was a symbol of protesters in Ferguson, Missouri, Noah said, “I never thought I’d be more afraid of police here than in South Africa. It kind of made me nostalgic for the old days back home.”

He played a game of “Spot the Africa,” contrasting a picture of a gleaming new central African superhighway with a pothole-filled picture of New York’s FDR drive he took from his cab ride into Manhattan.

Noah’s selection means late-night TV continues to be a male-dominated domain. Tina Fey and Amy Poehler were among the comics cited in public polls as favorites for the new role, but there’s no indication they were interested or considered.

“We love women,” said Michele Ganeless, Comedy Central president. “We talked to women and we talked to men, and we really think we found the best person for the job in Trevor.”

Although at the moment he is less than a household name, Ganeless called his selection not so much a risk as an opportunity.

“He was poised to explode here in this country over the next couple of years, and obviously this will accelerate that process,” she said. “But people won’t come to the show with preconceptions. They will get to discover him, and form their opinions of him, as they watch him host.”

Stewart has been a part of the cultural landscape with a bitingly comic look at the news and how it is covered in the media. He has not set a date for his exit from “The Daily Show” and, as a result, Comedy Central said nothing on Monday about when Noah would take over.

Stewart offered his endorsement on Monday.

“I’m thrilled for the show and for Trevor,” he said. “He’s a tremendous comic and talent that we’ve loved working with … In fact, I may rejoin as a correspondent just to be part of it.”

In South Africa, the announcement made breaking news on a national television news station. On social media, Noah’s name became a trending topic within minutes, with some Twitter users saying he not only represented South Africa, but also the African continent.

“This is a big achievement not only for South Africa but the continent,” the party said in a statement.

“Out of a lot of guys I know in comedy, he probably works the hardest,” said Gola, adding that Noah had spent years honing his stand-up routine.

Noah used his biracial identity to challenge South Africa’s race issues, using personal anecdotes from his own life. Growing up biracial in the formerly segregated township of Soweto, Noah once said his birth was a crime.

Trevor Noah defends self in backlash to old tweets

NEW YORK — Trevor Noah, the newly announced host of “The Daily Show,” rejected the backlash over his graphic tweets targeting Jews and women as an unfair reflection of him and his comedy.

“To reduce my views to a handful of jokes that didn’t land is not a true reflection of my character, nor my evolution as a comedian,” Noah posted Tuesday on his Twitter account, the same one that included past tweets others deemed offensive.

Comedy Central also came to his defense, calling Noah a “provocative” comedian who “spares no one, himself included.”

“To judge him or his comedy based on a handful of jokes is unfair,” the network said in a statement, adding that he has “a bright future at Comedy Central.”

Noah was announced as Jon Stewart’s successor Monday. The next day, he was a trending topic on Twitter as he drew fire for jokes described as tasteless, hateful – and unfunny.

Roseanne Barr was among those calling out the 31-year-old South African comic, who has an international following and 2 million Twitter followers.

Noah’s controversial tweets were posted between 2009 and 2014.

In 2009 he wrote: “Almost bumped a Jewish kid crossing the road. He didn’t look b4 crossing but I still would hav felt so bad in my german car!”

In a post from 2011, he writes: “Oh yeah the weekend. People are gonna get drunk & think that I’m sexy!” He attributes the joke to “fat chicks everywhere.”

The tweets showed a different side to Noah than the picture painted by Comedy Central and the comedian himself just a day earlier: In a phone interview Monday from Dubai, where Noah was traveling on a comedy tour, he likened himself to the New York-born Stewart, saying, “One thing we both share: We are both progressives.” He added, “traveling the world I’ve learned that progressives, regardless of their locations, think in a global space.”

On Monday, Ganeless spoke of the advantage of introducing Noah to a mainstream U.S. audience through “The Daily Show,” with viewers coming to the show he hosts with no preconceptions. “They will get to discover him, and form their opinions of him, as they watch him host.”

But by Tuesday, some opinions were already forming. Weighing in on Noah’s selection, a Slate column compared his vetting to that of Sarah Palin as a running mate for presidential candidate John McCain.

The choice of a new host for “The Daily Show” is a critical decision not only for the satirical-news program, but for the network, whose identity has largely been forged by the “Daily Show” franchise, which for years was followed by the likewise signature “The Colbert Report.”

By the end of this year, Comedy Central will have completely remade this programming block. In January, African-American comic Larry Wilmore replaced the “The Colbert Report” hosting “The Nightly Show.”