Travis Scott and Cardi B headlining Made in America Festival 2019 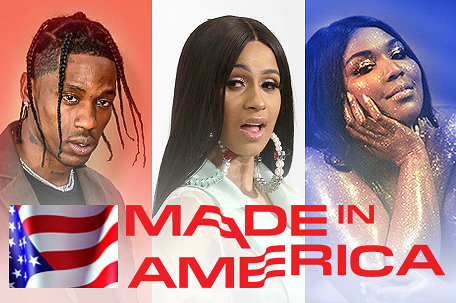 ABOVE PHOTOS: Travis Scott, Cardi B, and Lizzo

After “Made in America” was almost forced out of Philadelphia last year, Jay-Z’s renowned festival is coming back to the City of Brotherly Love.

On Aug. 31 and Sept. 1, Travis Scott and Cardi B will take on the reins as headliners for this summer’s festivities after Post Malone and Nicki Minaj were bestowed the honors last year.

Fans will also be delighted to know that several budding stars such as Megan Thee Stallion, Pink Sweat$, Tierra Whack, Da Baby, and Roddy Ricch will grace the stage.

While MIA is known for its star-studded line-up and dazzling performances, Roc Nation has always made it a priority to give back to the community during that weekend.

This year, Roc Nation once again tapped the ACLU of Pennsylvania as its official charity partner. Also, the Meek Mill and Jay-Z-led REFORM Alliance will see a portion of the proceeds as well.