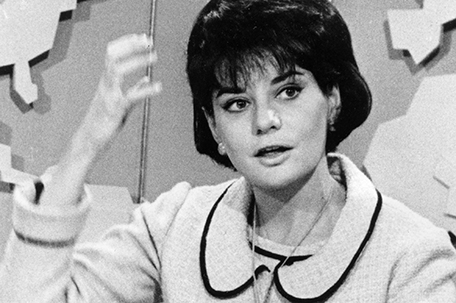 ABOVE PHOTO: TV journalist Barbara Walters, a member of NBC’s Today Show, gestures during an appearance at the morning show in New York City, May, 20, 1965. (AP Photo)

NEW YORK — Reaction poured in from the worlds of journalism, politics, sports and entertainment following the death of TV news pioneer and “The View” creator Barbara Walters. She died Friday at her home in New York at age 93. An intrepid interviewer, anchor and program host, she led the way as the first woman to become a TV news superstar.

“Without Barbara Walters there wouldn’t have been me — nor any other woman you see on evening, morning, and daily news. She was indeed a Trailblazer. I did my very first television audition with her in mind the whole time. Grateful that she was such a powerful and gracious role model. Grateful to have known her. Grateful to have followed in her Light.”

“Barbara Walters was the OG of female broadcasters. She was just as comfortable interviewing world leaders as she was Oscar winners and she had to fight like hell for every interview. I deeply admired her and she was incredibly supportive through the years. … As I wrote in my book, she liked to say we were similar in that neither of us was particularly glamorous. I never quite knew how to take that, although being in Barbara’s mold was nothing but a compliment.”

“Barbara was a true legend, a pioneer not just for women in journalism but for journalism itself. She was a one-of-a-kind reporter who landed many of the most important interviews of our time, from heads of state to the biggest celebrities and sports icons. I had the pleasure of calling Barbara a colleague for more than three decades, but more importantly, I was able to call her a dear friend. She will be missed by all of us at The Walt Disney Company, and we send our deepest condolences to her daughter, Jacqueline.”

“I owe Barbara Walters more than I could ever repay. Rest well sister…mother…friend…colleague…mentor.”

— Star Jones, an original co-host on “The View”

“The Legend. The Blueprint. The Greatest. Rest in Peace Barbara Walters.”

“Barbara Walters was a true trailblazer. Forever grateful for her stellar example and for her friendship. Sending condolences to her daughter and family.”

“The world of journalism has lost a pillar of professionalism, courage, and integrity. Barbara Walters was a trailblazer and a true pro. She outworked, out-thought, and out-hustled her competitors. She left the world the better for it. She will be deeply missed. RIP.”

“Barbara Walters never flinched when questioning the world’s most powerful people. She held them accountable. She cared about the truth, and she made us care too. Fortunately, she inspired many other journalists to be just as unrelenting. We are all better off because of her.” — Kareem Abdul-Jabbar, NBA Hall of Famer

“Pioneering TV news broadcaster Barbara Walters has died. A true trailblazer, she was the 1st woman anchor on the evening news. And I was privileged to know her. When she interviewed me, it was clear she did her homework. She was always prepared. May she rest in power.” — Billie Jean King, tennis champion

“So often we toss around the words icon, legend, trailblazer – but Barbara Walters was all of these. And perhaps, above all else, Barbara Walters was brave. She paved the way for so many — we learned from her — and remain in awe of her to this day. RIP, Barbara.”