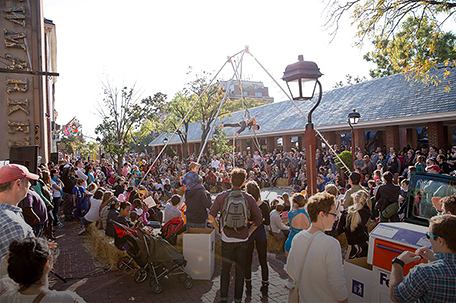 While rumors persist year-round of real ghosts inhabiting some of Philadelphia’s most historic sites, it’s during Halloween season when other-worldly creatures emerge from all corners of the region to make it a happily haunted time of year.

For serious thrill-seekers, several of the area’s haunted houses (like famed Terror Behind the Walls at Eastern State Penitentiary) have earned acclaim for their Hollywood-quality special effects, animatronics, pyrotechnics and teams of horrifically talented professional actors.

Meanwhile, families with wee ones can reap gentle thrills at Boo at the Zoo at the Philadelphia Zoo, the Scarecrow Walk at Morris Arboretum or the not-too-scary Count’s Halloween Spooktacular at Sesame Place.

[For more information about events got to www.visitphilly.com] 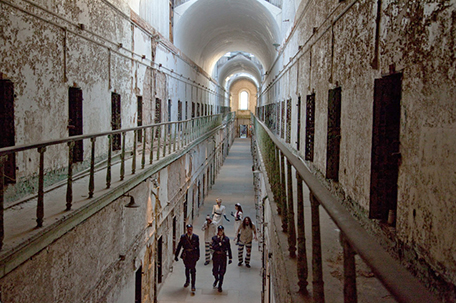 Eastern State Penitentiary is spooky enough, but during Halloween, it’s downright frightening during Terror Behind the Walls, the largest haunted house in the country. (M. Edlow for Visit Philadelphia)

Terror Behind the Walls at Eastern State Penitentiary

Celebrate the Halloween season by testing your nerves at Eastern State Penitentiary’s Terror Behind the Walls, a spooky haunted house inside a history-rich, abandoned prison. Designed to be high-startle, Terror Behind the Walls includes Hollywood-quality special effects and lighting, digital sound, animatronic creatures and custom props. Over 200 performers participate in six separate attractions – including the new Blood Yard – on the 11-acre complex.

Tiptoe carefully through multiple cobblestoned Philadelphia streets as the guides of the Spirits of ‘76 Ghost Tour tell tales of history and hauntings, stopping at more than 20 scary sites in some of the city’s most historic neighborhoods. As an added (and less-unnerving bonus), tour-goers will be taken to see where scenes of several big screen thrillers — including The Sixth Sense, Shooter and National Treasure — were filmed! 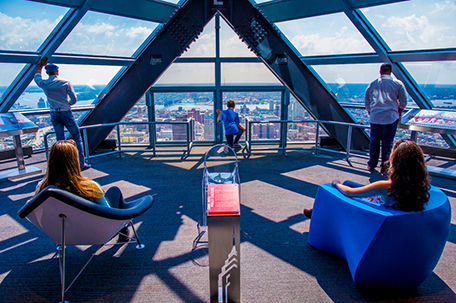 Have you ever played laser tag 57 stories in the air? Now’s your chance. (J. Fusco for Visit Philadelphia)

Enjoy an elimination-style laser tag tournament amidst sky-high views from the 57th floor locale of One Liberty Observation Deck. In between games at this adults-only event, DJs will spin live beats and cocktails will be served.

Individual Tickets: $30 — Individual registrations will be put into teams of 10.

Adults only. Must be 21 with a valid ID to drink. 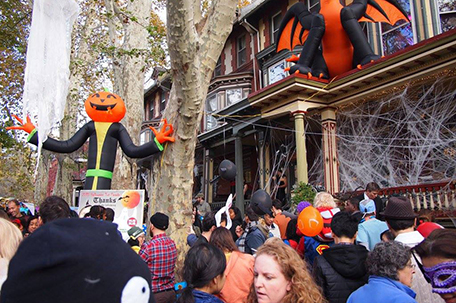 Halloween at The Woodlands

Halloween spirit? West Philly’s The Woodlands is full of it! Here, events include a Halloween movie double feature (Ghostbusters and Poltergeist), a night of cocktails and tours highlighting the “wicked woman” buried at The Woodlands, a Halloween Family Fun Day and more. Click the button below to discover all of the seasonal events at The Woodlands this year.

Halloween at the Museum of the American Revolution

Dress to impress — and score a deal — this Halloween at the Museum of the American Revolution, where costumed attire gets kids $2 off admission during Halloween weekend. Leading up to the holiday, events of all sorts are scheduled to unfold, ranging from Revolutionary-inspired pumpkin-carving demos to a history discussion on what happened to the bodies of soldiers after dying in battle. 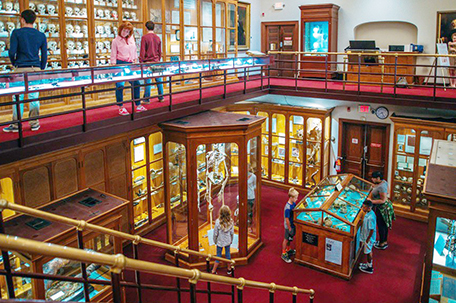 The Mutter Museum invites guests (ages 21 and up) to explore its medical oddities collection in costume this Halloween season.
(J. Fusco for Visit Philadelphia)

Mischief at the Mutter Museum

Come out for the Mütter Museum’s third annual Mischief party, where costumed guests are invited to enjoy drinks from an open bar and view the museum’s scientifically creepy collections. Upgrade to the VIP experience for a night that includes a sampling of 13 tasty courses of food.

Consumed: Tales from the Candy Crypt at Shane Confectionery

Old City’s Shane Confectionery hosts Consumed: Tales from the Candy Crypt, an event that will guide you through the nation’s oldest continuously operated confectionery while introducing you to tormented villains along the way. Opportunities to trick-or-treat for magical candy cures will present themselves at multiple moments, and at the end of the 45-minute experience, you’ll walk away with bounty of delicious treats to take home.

For two weekends in October, the Ebenezer Maxwell Mansion hosts performances of the classic Victorian melodrama Sweeney Todd. The murder mystery begs you to question: Who killed the man found dead at the start of the show? It’s up to you to find out during a night of theatrical fun. 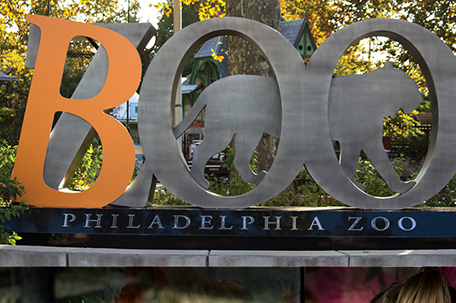 Celebrate Halloween with all your favorite furry friends during Boo at the Zoo. (Photo: Philadelphia Zoo)

Halloween with Kids–Boo at the Zoo

Kids get to trick-or-treat with lions and tigers and bears during Boo at the Zoo at the Philadelphia Zoo. Beyond scoring candy, little ones can also look forward to a haybale maze, the not-so-scary Extinction Graveyard detailing extinction around the world, pictures in front of a giant pumpkin wall and more. 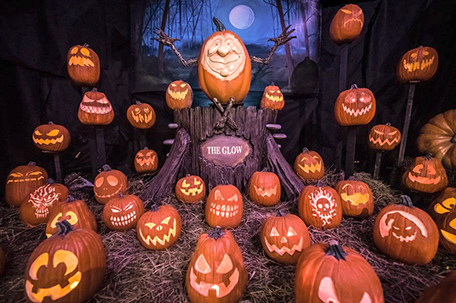 This October, head to Fairmount Park to see thousands of hand-carved pumpkins on display. (Photo courtesy The Glow Philadelphia)

Over 5,000 hand-carved pumpkins call West Fairmount Park home this month as part of The Glow: A Jack O’Lantern Experience. Each weekend through the end of October, lanterns — ranging from famous Philly icons and sports figures to superheroes and princesses — will illuminate a trail for visitors to stroll along throughout the park adjacent to the Mann Center for Performing Arts. Advanced tickets are required and start at $16.

Little ones can pick a pumpkin, decorate it and take it home during Franklin Square’s annual Halloween celebration.

Franklin Square welcomes October with two special Halloween happenings. On Pumpkin Patch day (October 21), those with kiddos can pick out a pumpkin for free and dive into an afternoon of decorating. Then, on October 28, Franklin Square hosts a Halloween treat-filled scavenger hunt throughout the park.

Halloween at the Market at Reading Terminal Market

A number of merchants at the massive Reading Terminal Market will hand out treats on Saturday, October 28 from 9:30 a.m. to 1 p.m. Stop by the Book Nook (behind Miller’s Twist) between 9:30 and 10 a.m. for a Halloween-themed storytime and enjoy caramel-apple-making and pumpkin-carving demos at City Kitchen from 11 a.m. to noon.

From Parc to El Rey to the The Bellevue to TD Bank to Sweat Fitness, businesses and restaurants all throughout the Rittenhouse Square neighborhood welcome costumed trick-or-treaters to come inside for treats. The Rittenhouse Row Annual Halloween Celebration takes place from 10 a.m. to 5 p.m. and is free for those of all ages.

and 17th and 18th from Sansom to Locust.

Free and open to the public.

Kids, adults and even Fido can enjoy Fall Festival and Spooky Saturday in East Passyunk. While youngsters are painting pumpkins, trick-or-treating at local shops and showing off during a kids’ (and dogs’) costume contest, the adults can hit up neighborhood food vendors and local restaurants for tasty bites and seasonal beverages, rock out to live bands and shop for crafts.

South Street’s Pumpkin Fest takes over Headhouse Plaza on October 28 for an afternoon of music, shopping and plenty of other entertainment and hands-on activities for the whole family. Scary movies will also be screened during the five-hour event, set from noon to 5 p.m.

Celebrate silly, not-too-spooky fun at The Count’s Halloween Spooktacular at Sesame Place. On weekends through October, the park is transformed into a Halloween haven fit for those of all ages! Come in costume and enjoy themed shows, a Halloween maze and everyone’s favorite Sesame Street friends. Rides, a Halloween parade and other special activities are all part of the annual fun.

Not all scarecrows are scary — especially those that are part of the annual Scarecrow Display in Bucks County. Throughout Peddler’s Village, 150 larger-than-life scarecrow creations are on display, including everything from classic scarecrows to intensely creepy ones.

This autumn, more than 30 scarecrows are decked out in the “Halloween Spooky Favorites” theme at Chestnut Hill’s Morris Arboretum. Vote for your favorite and afterward take a stroll through the beautiful, fall-foliage-filled grounds surrounding the contest.

Manayunk celebrates Halloween with trick-or-treating along Main Street and a festive costume parade for both kids and dogs. Other activities include a corn maze at Venice Island.

Made from massive straw bales, the Straw Maze at the Woodmere Art Museum invites kids to come out for an all-afternoon climbing session. On Saturdays, a visit also includes craft activities for the whole family.

Historic Germantown gets in on the harvest fun with its Halloween Harvest Festival at the Stenton House on Germantown Ave. The free event will have crafting activities, pumpkin painting, a spooky cellar tour and more to keep the entire family entertained.

From 5 to 7 p.m. on Halloween, several blocks of Cecil B. Moore Avenue become a haven of free treats for the kiddos. Taking place between Broad and 16th streets, the annual Avenue of Treats, hosted by Beech Community Services, also features face painting and other hands-on activities.

Halloween at the Rosenbach

The Rosenbach of the Free Library of Philadelphia gets all dressed up in its spookiest decor for a special Halloween soiree. Put on a costume of your own and get ready to explore the library’s Frankenstein & Dracula exhibition, an exploration of mad science and medical oddities. Light refreshments will be served.

Ten ways to get spooked in Philly this Halloween season