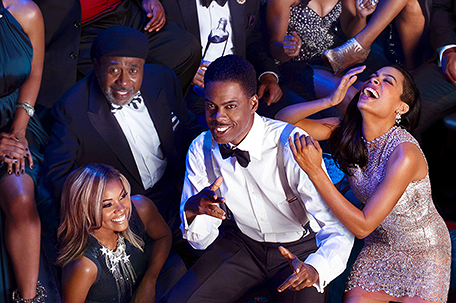 The third time is definitely the charm when it comes to honing serious directorial and screenwriting chops for funny man Chris Rock in the new film, “Top Five.”  Centered on comedian turned b-list actor Andre Allen (Rock) he is working the media circuit to promote a new controversial movie in which he plays a serious role instead of beloved iconic character ‘Hammy the Bear.’  He also gets the pleasure of reluctantly being chronicled by New York Times journalist Chelsea Brown (Rosario Dawson).  In between disastrous interviews, he is preparing for matrimony with overly dramatic and self-absorbed reality TV star Erica Long (Gabrielle Union) while also trying to retain his recent sobriety.

The chaos is enough to make anyone go crazy, and Andre Allen does his best to keep his life-turned-three-ring-circus under control.  But what’s life without a little bit of insanity?  There is plenty to go around with all the crazy characters in this film including his best friend turned Body Man (J.B. Smoove) which was an interesting move in itself as Smoove is known to be outrageous, yet tones it down a great deal and becomes the protector/problem solver to Allen’s celebrity lifestyle, adding to his own acting repertoire in a refreshing way.

This film is teeming with black excellence—from Ben Vereen in the not-so-patriarchal role to Cedric the Entertainer, Sherri Shepherd, Gabourey Sidibe (“Precious”) and a surprising cameo from the original Ruff Ryder, let it be known that Rock showed love to all of black Hollywood and remembered his SNL roots as everyone and their Momma gets some camera time.

One of the best sequences is when Allen goes back to his former hood in the projects to chop it up with his old friends and family.  As they get interviewed by Brown and engage in real life conversation, it feels as if the audience is taken back to their own family gathering.  The dialogue is rich with laugh-out-loud, blatantly honest humor.  The discussion of each of their top five hip-hop artists of all time gets even audience members talking.  As for my top five, and trust me, this was ridiculously difficult, I’d have to say in no particular order: A Tribe Called Quest, Tupac, Childish Gambino, Kanye West, and Outkast with an honorable mention to The Roots and Slum Village.  Feel free to let me know yours.

With underlying emphasis on the hip-hop world, hence the title, the soundtrack was absolutely insane, there was plenty of head bobbing and lip synching to be had, as no other than Philly’s native son Ahmir ‘Questlove’ Thompson of rap band The Roots compiled the score.  You will never hear Freddie Jackson’s “You Are My Lady” the same way again.  It seems as if this film were made for hip-hop enthusiasts, as no other than mega stars Jay-Z and Kanye West lent their stardom to Executive Producer roles.  Promotion for the film was even brilliant—barely anything is revealed in the trailer—you actually have to go see the film!

Even when Allen confronts his biggest critic (who my partner-in-crime has likened me to, [see ‘Addicted Needs Some Rehab’]) and it seems he’s taken a turn for the worst, it still proves to be hilarious.  This film doesn’t fail, and already has some wondering whether it can break the mold for being nominated for an Oscar in the comedy category.

Even if you don’t pick up on some of the one-liners and quick-witted quips Rock and company lay down, there is still family life drama and sexually charged comedy throughout.  In fact, there’s rarely a moment in the duration of the film that isn’t met with laughter.

Jordan Hoffman of Vanity Fair says that this is Rock’s Annie Hall.  If you get a chance to see both films, I don’t think the comparison is very far fetched.  This film is fantastically candid and addresses issues that a lot of people would rather sweep under the rug somewhere (this did not go unnoticed in the theater with a few scenes.)  Rock has fully proven he is not afraid to tell it like it was and is to anyone, leaving no holds barred.  With the making of this film, it is evident he is trying to make it into your top five comedy films list.