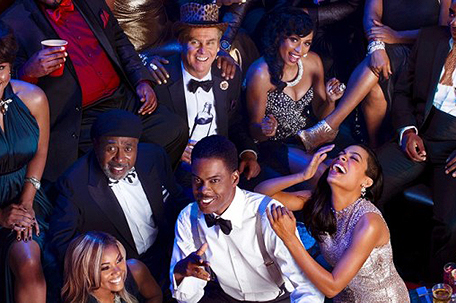 “It’s never just a movie,” says Chris Rock’s Andre Allen in Top Five, and that sentiment definitely applies to the comedy veteran’s latest directorial effort. While on the surface it’s an incisive and playful look at celebrity, media and fame, it’s also about the difficulty, fear and risk of stepping outside your comfort zone, whether in your career or personal life. While there are many meta layers to Top Five—also written by Rock, clearly drawing from his many years in the industry—it avoids the trap of simply being a celebrity vehicle about celebrity, by displaying a surprising heart beneath its very funny surface.

The film follows Andre—a familiar but very fictionalized version of Rock himself—and finds the popular A-lister at a crossroads. His wedding to reality star Erica Long (Gabrielle Union) is just a few days away and will be a big TV event on Bravo. Meanwhile, Andre—who has risen to stardom with his “Hammy” action/comedy franchise, playing an actual bear turned cop who yells out phrases like “It’s Hammy time”—has taken a turn toward serious films with Uprize, a drama about the Haitian slave revolution. And so, with events on the small screen and big screen on the way, Andre’s agent pushes him to participate in a New York Times profile, even though they’ve routinely trashed his movies. Andre reluctantly agrees, and the framework of Top Five is put into place, with the story spanning next 24 hours. Reporter Chelsea Brown (Rosario Dawson) spends the day with Andre to get a better idea of who he is and where he comes from, while conducting an interview that she promises will lead to an insightful article far beyond the barbs the paper usually slings his way.

While easily succeeding as a laugh out loud comedy, Top Five could also be viewed as Rock trying to reconcile his own feelings about continuing down the comedy path that has resulted in some of the greatest successes of his career, or indulging in his more cinephile side (don’t forget Rock’s I Think I Love My Wife was a remake of Eric Rohmer’s Love In The Afternoon, and at one time he banged out a script for a redo of Akira Kurosawa’s High & Low). But for the character of Andre, this debate is complicated by his recent sobriety. Drunk or high or both throughout his rise to the top, he doesn’t know if can be as funny if he’s clean. Moreover, Andre wants his identity to be more than just playing Hammy. While there is probably a more ponderous movie to be made about this subject matter, Rock’s light approach is refreshing and even a bit adventurous, blending a few different genres with highly enjoyable ease.

Clearly influenced by Richard Linklater’s Before trilogy (and don’t forget Rock starred in Julie Delpy’s similarly vibed 2 Days In New York), the writer/director/actor makes the most of his morning-to-night exploration of Manhattan, taking his characters from high end fashion boutiques to gritty housing projects, and everything in between. But this isn’t just a walk and talk picture. As Andre recounts his career to Chelsea, the film jumps to flashbacks that range from dramatic to full blown raunchy comedy (one extended anecdote ends with a post-coital shot of a bed that’s one of the grossest and funniest things you’ll see all year). There is also a gentle hum of romance too, one that, while obvious, never overplays its hand, nor does it traditionally resolve, with Rock nicely choosing a more flawed conclusion for his flawed characters.

And it’s this all part of the great care Rock extends to the screenplay. As his co-star, Dawson gets a nicely drawn, fully realized role to bite into. While she obviously fits the requirements of being knockout gorgeous to catch the eye of Andre, the audience gets to peer into Chelsea’s personal life, which includes a daughter and a boyfriend with whom things are far from what they seem. She’s intelligent and sharp, and you quickly see that Andre’s interest in her goes beyond the surface. And even J.B. Smoove, playing Andre’s best friend, body man and bodyguard—a role that would be a throwaway anywhere else—gets enough material to make this longstanding friendship real (plus a running gag about his attraction to big women is actually amusing, and gives Smoove some nice space to riff).

Thematically, everything ties together with the title. Throughout the film, characters list and argue about their “top five” hip hop artists of all time. And like taking a glance a someone’s bookshelf for the first time, Rock knows the choices and favorites say a lot about who someone is as a person. He skillfully manages to turn the running plot device into something meaningful by the film’s end. Sure, it’s nothing very deep or profound, but it’s another assured touch by Rock, whose work in “Top Five” displays the finest strengths we’ve seen yet from a filmmaker who is clearly becoming more immersed in and thoughtful about his craft. There is a slow growing group of comic voices aspiring to put more soul and feeling into comedies, and Rock joins Louis CK, Lena Dunham and Judd Apatow in that category with this film.

The film features cameos by Cedric The Enterainer, Adam Sandler, Jerry Seinfeld, Whoopi Goldberg, Kevin Hart, Tracy Morgan and one that is too good to even hint at or spoil. While Rock calls in a lot of friends for backup on this movie, his confidence as a leading man, writer and director had never been sharper. He commands “Top Five” on all fronts, and delivers an outrageous and sometimes wicked good time, and it does the primary job of entertaining with flying colors, while also delivering something genuinely compelling if you choose to dig beyond the broad array of laughs. The perceptions about the industry are cutting, if nothing new, but the smart observations about the choices and concerns of Andre are real. Will someone ask Rock what his “top five” movies are? After watching this, we really want to know. [A-/B+]