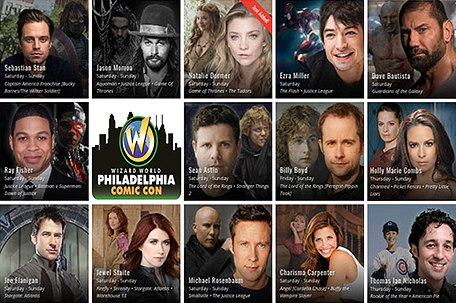 Wizard World Comic Con events bring together thousands of fans of all ages to celebrate the best in pop culture: movies, television, gaming, live entertainment, comics, sci-fi, graphic novels, toys, original art, collectibles, contests and more. The Philadelphia show’s hours are Thursday, May 17, 4-9 PM.; Friday, May 18, noon-7 PM.; Saturday, May 19, 10 AM.-7 PM; Sunday, May 20, 10 AM-4 PM, kids 10 and under are admitted free with paid adult.

Wizard World Comic Con Philadelphia is also the place for cosplay, with fans young and old showing off their best costumes throughout the event. Fans dressed as every imaginable character – and some never before dreamed – will roam the convention floor and participate in the famed Wizard World Costume Contest on Saturday evening.

For more on the 2018 Wizard World Philadelphia, visit http://wizd.me/PhiladelphiaPR.

Off To See The Wizard (World)

2017’s brighter side of romance, Lisa Bonet and Jason Momoa say “I Do”