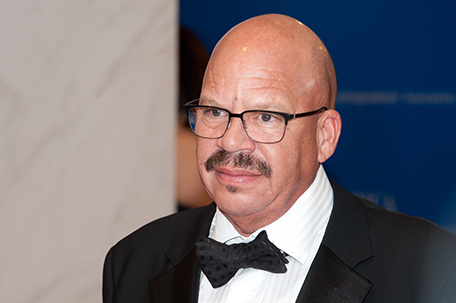 Tom Joyner is asking folks to think twice about the rumors they read on the Internet, especially those concerning him being forced into an early retirement. A report from the Daily Mail had claimed the legendary syndicated radio host is being forced into an early retirement to make room for younger talent. A ‘source’ said in the article that the plan was to have Joyner, 65, out by the time President Barack Obama leaves office.  And that the transition was reportedly being put in place by radio conglomerate Radio One and Joyner’s former business associate David Kantor.

Following reports of his rumored departure in December 2016, the veteran radio host took to Twitter to address the claims and assure fans that he isn’t going anywhere.

“The Party with a Purpose® that’s been here for you for years is not stopping!” Joyner tweeted Tuesday evening. “We’ll talk to you in the morning on your radio! (P.S. Don’t believe everything you read on the internet).”

“Any stories that suggest major changes to the Tom Joyner Morning Show are inaccurate. Tom Joyner is under contract with Reach Media until the end of 2017. We expect that Reach will continue to syndicate Tom’s show beyond that date and for as long as he would like to be on the air. There has always been refinements and updates to the show, as well as market changes due to local conditions, and there may be some in the future; but Tom Joyner and the Tom Joyner Morning Show continues to be strong and is a daily Party with a Purpose. Reach is committed to Tom Joyner for the long term who remains committed to radio, his audience and the future.”