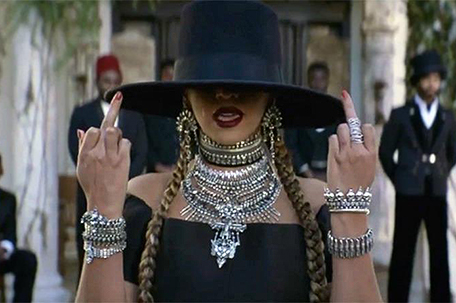 To the Left: The Anti Beyoncé Protest That Wasn’t

There is no denying pop singer Beyoncé’s influence, whether you are a fan of her music or not. We’ve all heard by now about the anti-Beyoncé protest at the NFL Headquarters in New York City that instead transformed into a rally in support of the singer. Beyoncé supporters, organized by Mary Pryor, countered the protest affirming the singer’s right to her artistic expression.

After much pre-demonstration publicity, only four anti-Beyoncé demonstrators showed up to protest the pop star’s Super Bowl half time performance.

Pryor was passionate about the need to organize the successful Feb. 16 rally to counter the demonstration against the singer.

“NFL is a major place where Blackness is seen by damn near almost everyone in America,” said Pryor.

Pryor also noted that the NFL’s image is heavily African-American with many players still having familial connections in Black communities where injustices still take place.

Beyoncé’s highly anticipated Super Bowl performance was viewed by some to be anti-police and an ode to human rights activist group and leaders such as the Black Panthers, Malcolm X and others.  The Black Panthers and Malcolm X were vocal about their human right to defend themselves against KKK intimidation and violence, police brutality, lynching and other Jim Crow era atrocities committed against African-Americans.

“For every moment there is a Black image on TV, if it can mark an expression that affirms one of hundreds of thousands of experiences of what it is to be Black,” said Pryor.

“Beyoncé is not Assata Shakur or Angela Davis….like, she’s not here for all that,” continued Pryor.

“But that performance and the [Formation] video and song with the message, for the current status quo, especially for a woman that does pop music, I think that was the heaviest she could go as far as affirming her Blackness.”