To Kill A Mockingbird: Review 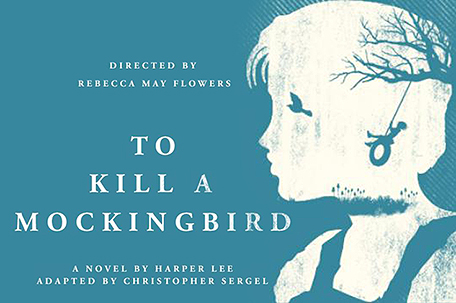 The Harper Lee novel “To Kill A Mockingbird” is considered a classic in American literature. The Pulitzer prize-winning novel — published in 1960 and adapted by Christopher Sergel — is set in Maycomb, Alabama in the 1930s. It tells the story of the Finch family’s experience of living in a small town comprised of citizens with even smaller minds. On the forefront of those experiences are racism, rape and the dilemma of doing the right thing, even when it’s in direct opposition to popular opinion. Under the direction of Rebecca May Flowers, The Steel River Playhouse in Pottstown featured a three-week stage productionbased on the book. The staging of a show can add so much to the dynamic of a performance. The audience at Steel River Playhouse lined both sides of the stage, creating an atmosphere where it felt like you were a part of the show.

The show opened with the inquisitive and fiery Scout (Brynn Washbourne) swinging on a tire swing. Scout’s curious nature paired well with the whimsical nature of her brother Jem (Liam Keenan) and her friend Dill Harris (Ben Minor). They spend most of their time spying on their elusive neighbor, Boo Radley (Matt Lake) and on Scout and Jem’s father and lawyer Atticus Finch (Paul Drake). They often find themselves in predicaments as they refuse to take “no” for an answer questioning the “why” in every situation presented to them. Atticus receives both backlash and threats from a number of members of his community for agreeing to represent Tom Robinson (Omar Bullock), a Black man accused of raping a White woman. Drake carries the weight of the show with a stoic strength that is both straight forward and endearing.

Having read the book in high school and being aware of the fact that the story is a period piece set in the 1930s, the strong language and frequent use of the “n word” did not come as a surprise… it did, however, cause an unexpected visceral reaction. To the credit of the cast, the show felt like being transported back in time.

There was a lingering tension present alongside the angst of knowing how this story would end. Perhaps it’s because the story of innocent Black men being accused of crimes they did not commit and not being given fair trials is just as pertinent now as it was then.

This story stands the test of time because of all of the concepts it presents: the fear of the unknown, the unwillingness for some to change, injustice, the notion that life is not fair, and understanding that sometimes no matter how hard we try, even when we are on the right side of history we don’t always win.

Scout, Jem and Dill are unafraid to challenge things that they do not agree with or understand. Atticus serves as a primary example of what it means to defend fairness even when all you cherish is at risk. The cast of “To Kill A Mockingbird” embodied their characters to the fullest extent. The young actors, Washbourne, Keenan and Minor, added balance to the heaviness of the story as tangible representatives of childhood innocence. They also offer teachable moments about not judging a book by its cover, and they serve as a glimmer of hope that eventually people will embrace empathy and practice it.  Paul Drake gave an outstanding performance, particularly in the court scene when he attempted to sway the court as he plead for the life of his client. Bullock’s performance is also quite compelling… mastering the art of saying everything with his eyes while saying nothing audibly.

After reading the novel and seeing this performance, the importance of what the mockingbird represents was evident. The quote “Shoot all the blue jays you want, if you can hit ‘em, but remember it’s a sin to kill a mockingbird.” That was the only time I ever heard Atticus say it was a sin to do something. “Mockingbirds don’t do one thing except make music for us to enjoy” sums it up perfectly.

While life is not quite as simple as blue jays and mockingbirds, people deserve to have the freedom to just be who they are without racism, bigotry or fear of the unknown taking that right away. Fighting for that right is always a battle worth taking on, win or lose.