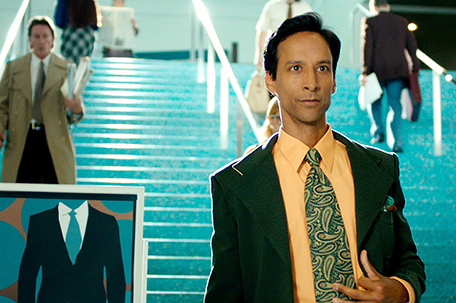 ABOVE PHOTO:  Danny Pudi as Sami in a scene from the new rom-com “The Tiger Hunter”.

Sami Malik (Danny Pudi) has had a crush on Ruby Iqbal (Karen David) for as long as he can remember. The lifelong friends were raised in the same village where both of their fathers were pillars of the community. His dad (Kay Kay Menon) was a celebrated tiger hunter, while hers (Iqbal Theba) was a highly-decorated general in the army.

Sami, who has recently completed his degree in engineering, only wants two things out of life: a successful career and to tie the knot with Ruby. She wants to marry him, too, so you’d think that walking down the aisle would be as simple as pie for them. Think again.

Trouble is, we’re talking about India in 1979, a time when most marriages were still arranged. And General Iqbal has made it clear to Sami that he will only surrender his daughter’s hand after the young lad has not only moved to the U.S., but has become gainfully employed there as an engineer, as well.

So, with the help of Ruby (who sold her beloved yellow moped) and many of their neighbors, Sami soon raised enough to relocate to Chicago, where he’d been offered a position with an engineering firm. However, only after arriving in the States is he informed by the sassy sister in Human Resources (Patricia Belcher) that he was being hired as a draftsman and at a much lower salary than that of an engineer.

To add insult to injury, he’s mugged on the street right after politely declining the bait-and-switch demotion. Suddenly broke and homeless, Sami thanks his lucky stars to be befriended by Babu (Rizwan Manji), a Pakistani who came to the country a year ago .

Next thing you know, Sami reluctantly moves into the tiny apartment the affable stranger shares with about a dozen other Southeast Asian immigrants. After hearing how they’re all underemployed, he grudgingly accepts a gig that’s way beneath him. This doesn’t bode well for his relationship with Ruby. The plot thickens when she and her demanding dad arrive in the country expecting to find Sami faring far better.

Thus unfolds “The Tiger Hunter,” a charming romantic comedy marking the marvelous directorial debut of UCLA Film School Grad Lena Khan. Lena also co-wrote the relentlessly-funny script that’s so convincingly executed by its talented cast, that the picture keeps you in stitches from beginning to end.

It is lighthearted look at the pursuit of the elusive American Dream from the perspective of a lovesick expat from the Subcontinent.

To see a trailer for The Tiger Hunter, visit: https://www.youtube.com/watch?v=SiUzXKFfkE8