Tiffany Hines dazzles as Eve in ‘Hit the Floor’ 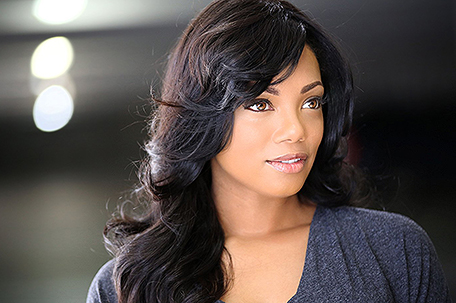 The scripted series “Hit the Floor,” has been a fan favorite for the past three seasons. “Hit The Floor” tells the story of The Los Angeles Devils, a professional basketball team and the dynamic ladies of their dance team…the Devil Girls. The show is known for steamy romances, intense rivalries, and the non-stop shift in power.

As “Hit the Floor” prepares for season four on a new network, it brings with it a number of new cast members. Among those new faces is Tiffany Hines. Hines sat down with the SUN to talk about her role as Eve on the show.

Hines — a Cincinnati, Ohio native, is no stranger to show business. A trained dancer, singer and actress, Hines has starred in “Bones”, “Nikita”, “Beyond the Break”, “Devious Maids”, and “Toni Braxton: Unbreak My Heart”. Her impressive body of work led to her landing the role on “Hit The Floor” in a way that can best be described as kismet.

Hines said, “It’s pretty amazing how it all came to be. Everything happens for a reason I’ll say that much. I actually was doing a film, maybe three months before with the girl that plays Kyle Hart, Katherine Bailess. We became really tight on the film we were doing for Lifetime. One day we were driving back from a shoot, and she said, “You know you’re a dancer, you should be on my show, but I don’t know if there are any main roles coming up”. Then she pulled over to the side of the road, we held hands and prayed to God. ‘Please, please, please send a role for Tiffany on the show this season.’ We threw it up to God and went home that day. We talk about it all the time, like can you believe that actually happened?” Hines added. “About three months later, my agent called me with all the auditions for the week. He said I have an audition for you, have you ever heard of a show called ‘Hit The Floor’? And I screamed, [and] I said ‘are you kidding me?!’”

As a newcomer joining the cast, Hines spoke about the immediate connection she made with her fellow actors.

“As an actress, I’ve been working for 14 years. I’ve gone on shows where they’ve already been established and I came in as a guest. You always want to be respectful and cautious when you go into other people’s home as an actress,” Hines said. “You never know what you’re going to get… but from day one at our table read, everybody felt this amazing energy. Everybody’s family on the show! We all genuinely love each other and we’re all there for each other. I just felt so blessed and grateful to have that right away. We even call and talk to each other on our downtime and it’s beautiful, because that kind of thing can’t really be faked on screen. So when you’re able to have that kind of chemistry naturally, I feel like it shows through and it just helps the show.”

Hines, who began dancing when she was three-years-old, trained in ballet, jazz, tap, lyrical, modern, hip-hop and used to compete. Although she doesn’t portray a dancer on the show, Hines spoke about the camaraderie she shared with the Devil Girls on set.

“I have so much fun in my downtime dancing with the dancers. The first time that I met the Devil Girls, we had just gotten upset and Kat took me over to where they were having dinner and I made my entrance by coming in and doing a little of the choreography. I did a triple turn just so you know people would know I may not dance on-screen with you, but I can still dance off-screen with you. So we have a lot of fun in our downtime, I mean I love the Devil Girls!”

Throughout her career, Hines has taken on characters that demand the attention of everyone watching. Her character Eve also possesses a charismatic presence that is sure to turn heads. Hines shared her excitement for playing Eve.

“Honestly I know I’ve played a lot of characters, but to date this is my favorite character I’ve ever played,” Hines said. “Shout out to my show runner James LaRosa. The writing is just amazing… it’s the kind of meat that an actor dreams of chopping into. Every day I would get my script and I would turn off my phone… I wouldn’t take any calls. I would read this amazing material and I just can’t wait for you guys to get to see it! All I can say right now though, is that Eve works for the league and she’s a strong, intelligent woman. She is new to the game but definitely not new to the world. You learn a lot even in the first episode about Eve.”

Fans of “Hit the Floor” can expect to get a lot of what they’ve grown to love from the casts and the show, a connection with new characters and quite a few surprises.

“There is still going to be a lot of scandals, secrets and sex… All of the stuff that made you love the show in the first place. But we are blessed to have a new home. We’re on BET… thank you BET we love you for bringing us back! They took it up to the next level–it’s crazy. There’s a lot more flavor in the dances… they really take it there. We even have Nicki Minaj’s song as our opening song. We’re so blessed to have BET as our new home because they’re really taking it up a degree. You want to talk about sex, scandal and secrets… it was way over-the-top and the cliffhangers… it’s going to blow you away!”

Be sure to also check out Tiffany Hines on “Magnum P.I” on CBS this fall. Keep up to date with all that she is doing by following Hines on Instagram and Twitter @tiffanyhines. Season four of “Hit the Floor,” is sure to be one for the records… don’t miss it!  “Hit the Floor” premieres on BET at 10pm ET/PT.

Tiffany Hines dazzles as Eve in ‘Hit the Floor’