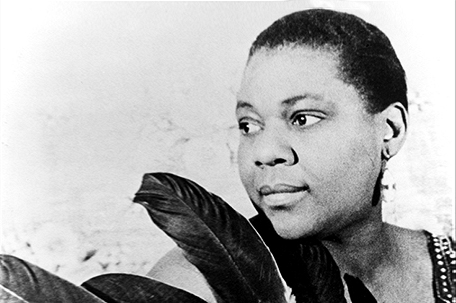 On the heels of news that actresses Mo’Nique and Khandi Alexander have joined Queen Latifah in the cast of HBO Films’ Bessie Smith biopic Blue Goose Hollow, I had a chance to read the screenplay for the film, a February 2014 draft.

Penned by Dee Rees, who will also direct the film, the script follows the turbulent life of the esteemed blues singer from her early years performing with blues legend Ma Rainey to her rise to earn the title of “Empress of the Blues,” to the career comeback shortly before her death.

Anyone who read Rees’ 2010 script for Pariah knows that there’s an evident richness to her writing. But even more so than that film, this script observes details in a way that suggests that visually, this is going to be more than the average period piece. The script handily takes in all the sumptuous details of the minstrel shows where Smith starts out performing, following her through greater fame, wealth, and the vaudeville circuit in the 1920s, through the tailspin of the Great Depression in the 1930s. Without giving away spoilers, I’ll say that the eclectic style of the artists, combined with the amounts of money they pull in at times, allow for stunning imagery.

Thematically, it’s a script that, although set in the past, deals with the very relevant topics of celebrity and the tangential nature of success. The story plays out as a wild ride led by Smith’s bubbling personality, free-wheeling style, and her push to steer her own life and career. Her character is portrayed as brash, feisty and unafraid to fight, which makes her an electric performer but wreaks havoc in her personal life. The character is subversive in her 1920s/1930s world, but definitely speaks to a modern audience.

Going hand in hand with Smith’s brand of early feminism is the theme of sexuality. This isn’t a script that subtly hints at secret behaviors behind closed doors. It fleshes out the bisexual relationships and cross-dressing that both Bessie and Ma Rainey were known for, particularly as women of size and unconventional beauty. While the sex isn’t gratuitous, it’s risque enough, along with the violence in the script, to make sense for a network like HBO.

It’s rumored that Queen Latifah has wanted to play the role of Bessie Smith for years, but you could argue that the best time for a story like this to be told is now, as discussions on feminism, body image and gender roles reach a fever pitch in mainstream media. All of the above could make good fodder for discussion when the film is released.

The plot is framed largely around the relationships in Smith’s life – with Rainey, who helps her gain confidence in both her singing and her sexuality as a young performer; with her husband Jack Gee, who insists on inserting himself deeper into her career; and later with Richard Morgan, a bootlegger who tries to win her heart. Besides Smith herself, Ma Rainey (to be played by Mo’Nique), Jack Gee (yet to be cast) and Smith’s older sister Viola (to be played by Alexander) are the meatiest roles in the script, the characters credited most with influencing Smith’s life. There’s also her older brother Clarence, a gentle and supportive character that performs with her throughout most of her career, and her longtime lover Lucille, who has a peripheral role and seems to be a fictional combination of a few real-life characters.

As with any good biopic, there are also a few well-known artists and historical figures that turn up in the script as Smith’s shows and recordings take her from the minstrel circuit to the Harlem Renaissance, though I’ll leave you to guess who those might be.

The dialogue is sharp, dominated by a Deep South dialect that the cast will have to master in order to keep us connected with the film.

Tonally, the script is drama punctuated by the liveliness of Smith’s persona, which especially resonates on stage. There are nearly 20 songs performed in the script and a lot will depend on Queen Latifah’s ability to woo an audience through the music and also carry off Smith’s complicated character with charm and believability. Again, this is a provocative character, with some of her exploits reaching near tall-tale status, and it could get unwieldy in the wrong hands.

It will definitely be one of the more challenging roles we’ve seen Latifah play. Considering all the performance scenes, her background as a recording artist as well as her part in Chicago (for which she earned Oscar, Gold Globe and BAFTA nominations) come to mind as evidence that she can give off the kind of saucy stage presence that the script suggests. To that point, Mo’Nique also has a few singing scenes in the script as Ma Rainey, which to my knowledge is a first for the actress.

It’s worth mentioning that the real-life Bessie Smith was dark-skinned and her complexion was an issue in both her career and in Rees’ script. So it’ll be interesting to see how that’s handled with the caramel-toned Latifah, and whether there will be any backlash similar to the stir over Zoe Saldana’s casting in the Nina Simone biopic, though I haven’t seen any as yet.

Overall, it’s a strong script that can make for an entertaining and compelling narrative. A lot will depend on the strength of the cast to pull off all the elements that Dee Rees has set forth on the page. As always, we’ll keep you posted as more news about the project surfaces.