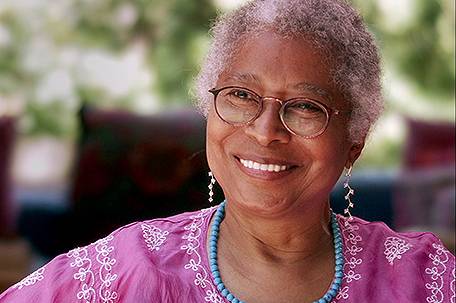 American Masters — Alice Walker: Beauty in Truth charts Walker’s inspiring journey from her birth into a family of sharecroppers in Eatonton, Ga. to the present. The film explores Walker’s relationship with her mother, poverty, and participation in the Civil Rights Movement, which were the formative influences on her consciousness and became the inherent themes in her writing.

Living through the violent racism and seismic social changes of mid-20th century America, Walker overcame adversity to achieve international recognition as one of the most influential — and controversial — writers of the 20th century. Delving into her personal life, Alice Walker: Beauty in Truth reveals the inspiration for many of her works, including Once (1968), The Third Life of Grange Copeland (1970), Meridian (1976), The Color Purple (1982), In Search of Our Mothers’ Gardens (1983), Possessing the Secret of Joy (1992) and Overcoming Speechlessness (2010).

Praised and pilloried, Walker has driven people to express joy as well as anger and ruthless vilification over her art, personal views and global human rights advocacy. As seen in the film, Yoko Ono awarded her the 2010 LennonOno Peace Award for her ongoing humanitarian work. American Masters analyzes these aspects of the self-confessed renegade’s life and career.

“As a filmmaker, one of the deepest desires is to engage the audience in the conversation unfolding on screen. I am thrilled to offer this in Beauty In Truth, where Alice’s openness, warmth and on-screen intimacy reflects our long history of kinship,” said Parmar. “Making Beauty In Truth has been an adventure of discovery and sheer inspiration. I’m so pleased it will have a national audience on American Masters.” Parmar’s past works include feature film Nina’s Heavenly Delights (2006) and the documentary Warrior Marks (1993), based on the book of the same name that she and Walker co-authored.

“Alice Walker: Beauty in Truth is a complex exploration of a pioneering artist and human rights activist that gives audiences a penetrating look at a life lived with passionate commitment,” said Stephen Segaller, vice president of programming for WNET. “Having the American Masters premiere coincide with her 70th birthday is a nice bonus.”

American Masters — Alice Walker: Beauty in Truth is one of 50 films that form part of Women and Girls Lead, a public media campaign spearheaded by the Independent Television Service, that harnesses the power of documentary film to showcase extraordinary women and girls who are changing the world. The initiative features groundbreaking women like Alice Walker, who refuse to submit to gender stereotypes or compromise her form of artistic expression.