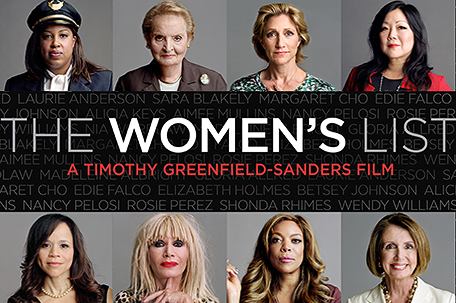 American Masters: The Women’s List focuses on these individuals’ exceptional achievements, struggles and identities. All trailblazers in their respective fields, these women share their experiences struggling against discrimination and overcoming challenges to make their voices heard and their influence felt. Toni Morrison opens the film with a reading of an introduction she wrote specifically for The Women’s List.

“As a lifelong feminist, I’m proud to have made The Women’s List and excited to have another one of my films join the American Masters library,” said Greenfield-Sanders.

“As with The Boomer List, Timothy has chosen an inspiring mix of talented voices,” said Michael Kantor, executive producer of “American Masters.” “Brought together, these 15 stories of different modern masters make for a profoundly moving film.”

Launched in 1986, American Masters has earned 28 Emmy Awards — including 10 for Outstanding Non-Fiction Series since 1999 and five for Outstanding Non-Fiction Special — 12 Peabodys, an Oscar, three Grammys, two Producers Guild Awards and many other honors. Now in its 29th season on PBS, the series is a production of Thirteen Productions LLC for WNET and also seen on the World channel.

To take “American Masters” beyond the television broadcast and further explore the themes, stories and personalities of masters past and present, the series’ companion website (http://pbs.org/americanmasters) offers streaming video of select films, interviews, photos, outtakes, essays and more.